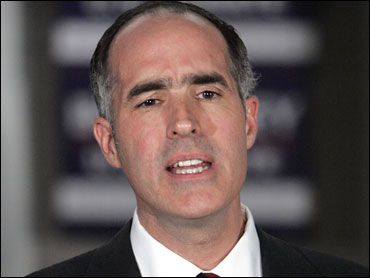 In response to the largest mass shooting in US history at an Orlando gay club, which killed 49 and injured more than 50, Democratic Pennsylvania Sen. Bob Casey said on Monday that he will introduce legislation targeting perpetrators of hate crimes.

Casey's Hate Crime Prevention Act would ban the sale and ownership of firearms for people convicted of committing a misdemeanor hate crime and for those who have received a "hate crime sentence enhancement."

A "hate crime sentence enhancement" refers to extra legal penalties set forth to the Hate Crime Sentencing Enhancement Act of 1994, which aimed to provide extra punishment in crimes where a victim was targeted because of their "actual perceived race, color, religion, national origin, ethnicity, gender, disability or sexual orientation."

Additionally, those "reasonably suspected" of being guilty of a hate crime could also be barred from purchasing a gun under Casey's current plan.

Casey spokesman John Rizzo said the vaguely-worded "reasonable standard" would be open to interpretation by the courts "since the language is intended to serve as a legal standard indicating criminality."

"If you have proven you will commit criminal acts based on hate, you absolutely should not have access to a gun," Casey said during Monday's press conference. "It's common sense. It is time we as members of Congress do something."

Rizzo said The Hate Crime Prevention Act "has been in development for months" and is planned to be officially introduced to Congress "sometime this week."

As far as working alongside and compromising with the GOP-controlled Congress, Rizzo said Sen. Casey "will work with anyone on this issue." Rizzo gave no insight into potential political bargaining chips Casey and other Democrats might use to increases chances of getting the legislation through Congress and onto President Obama's desk.

The release from Casey's office announcing the plan also suggested barring hate-crime perpetrators from gun purchases alone wouldn't be enough to address the root of the problem.

"Casey also called for other actions to prevent gun violence, including a ban on military-style weapons, limits on clips and magazines sizes, a ban on those on the terrorist watchlist from purchasing firearms and universal background checks," the release stated.

The release concludes by noting statistics from the Southern Poverty Law Center and National Crime Victimization Survey data on various hate groups in the US with the last sentence of the release stating, "Between 2010 and 2014 alone, more than 43,000 hate crimes were committed with a firearm."

"While we're still learning about the shooter's motivation, this is an act of terror and yet another mass shooting in our nation," Sen. Casey said about the deadly shooting in a statement on Sunday. "It is also an attack on the LGBT community."