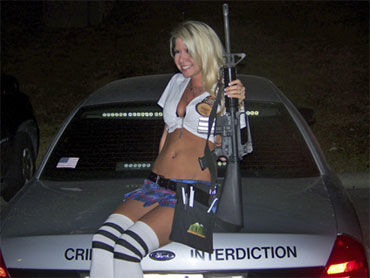 (AP Photo/Midland County Sheriff)
An unidentified waitress at Twin Peaks Restaurant and Bar posses for a photo in Round Rock, Texas, Aug. 10, 2009.

MIDLAND, Texas (CBS/AP) An embarrassed Sheriff Gary Painter fired one Midland County deputy and suspended three others without pay after a scantily dressed waitress holding a rifle posed for photographs on the trunk of a patrol vehicle.

Round Rock officers were dispatched to the restaurant after someone reported the waitress with the weapon, which had been given to her by one of the deputies who had been attending a training session near Austin.

The incident occurred last week in the parking lot of a Twin Peaks Restaurant and Bar, which promotes its "fun, friendly and sometimes flirty atmosphere!"

The deputies told Painter that they had about three to five beers each.

A fifth deputy who remained inside the eatery got a letter of reprimand.

More At The Midland Reporter-Telegram