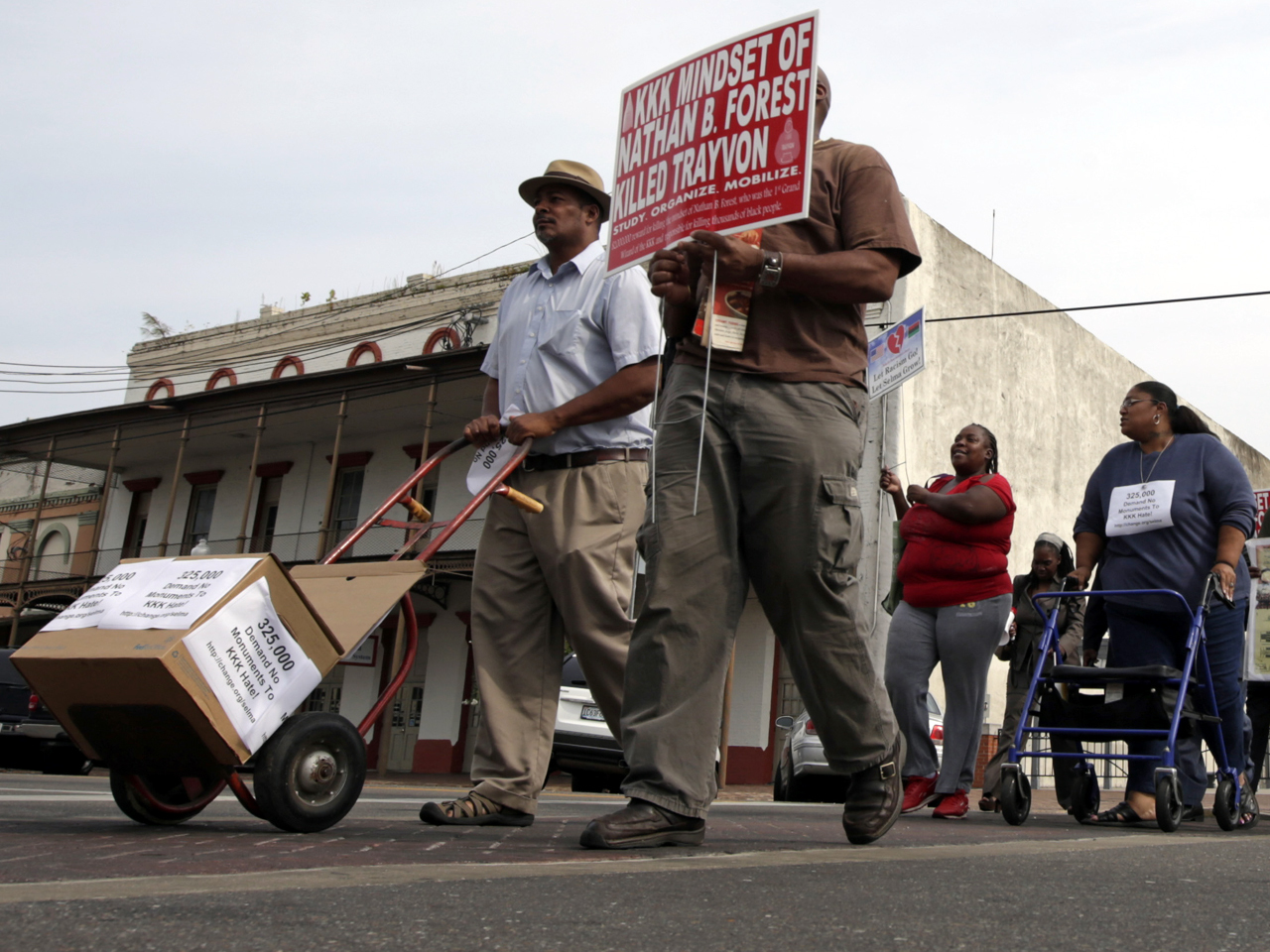 (AP) SELMA, Ala. - Council members in an Alabama city voted Tuesday to stop a group's work on a new monument honoring a Confederate general who was an early leader in the Ku Klux Klan.

The Selma City Council voted 4-0 with two members abstaining to stop all work on the monument to Gen. Nathan Bedford Forrest until the courts decide whether the city or a Confederate heritage group owns the cemetery property where the monument would be rebuilt.

The vote came after a group of protesters marched to City Hall.

Demonstrations by civil rights groups about 10 years ago led to the relocation of a Forrest monument from outside a city building near downtown to a section of a city cemetery honoring Confederate war dead. But Forrest's bust was removed and apparently stolen from atop a 7-foot granite memorial earlier this year, and efforts to rebuild it have drawn protests and calls by civil rights activists not to replace it.

Detractors say Forrest traded black people like cattle, massacred black Union soldiers and joined the early Ku Klux Klan. His defenders dispute much of that and counter with stories that depict him as a protector of slave families and defender of the weak who resigned from the KKK.

A member of the group Friends of Forrest, Pat Godwin, said she feels the protests have been an effort to obscure the police investigation of the disappearance of the bust.

"It's all smoke and mirrors to divert attention from the issue of the theft of the bust," Godwin said.

The council had earlier indicated it would allow people to speak on the issue at the Tuesday work session, but would not vote on the racially sensitive issue. Council members changed their mind after activist Rose Toure, a leader of the protests, and other speakers urged the council to vote. Council member Bennie Ruth Crenshaw moved that the council order all work on the monument stopped after city attorney Jimmy Nunn said he had not been able to locate a deed to the Confederate section of the cemetery.

"Let's stop the building and move this Nathan Bedford Forrest issue out of the way," Crenshaw said.

Another council member, Susan Keith, abstained from the vote. She said earlier she needed more information before she could decide how to vote. She said she would also like to wait until the investigation of the theft is completed.

"There's just too many discrepancies," she said.

The marchers, chanting "No justice, no peace," had started at the Edmund Pettus Bridge, where voting rights protestors were beaten by law enforcement officers during a 1965 march, an episode that drew national attention to violence against blacks in the South during the civil rights era.

Several people told council members that the city could move past those violent images by not allowing the monument to be rebuilt.

"How are we going to teach our kids anything if we give praise to this man?" asked Selma resident Rosa Monroe, who said Forrest was not the kind of man the city needs to be honoring.

Several members of Friends of Forrest watched the march, but declined to comment. No supporters of the monument spoke at the council work session.

The supporters did hand out a press release that described Forrest as a brave military leader who led efforts to defend Selma from siege by Union forces late in the Civil War.