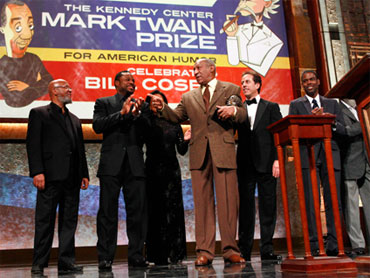 Bill Cosby watched as the stars lined up Monday night to pay tribute to his brand of comedy that broke down racial barriers and stereotypes. He quipped that usually when a man sees his life flash before his eyes, it's for a bad reason.

"But this is all right," the 72-year-old comedian and actor said after Chris Rock and Jerry Seinfeld saluted their fellow funny man with the Mark Twain Prize for American Humor at the John F. Kennedy Center for the Performing Arts. They were joined by two co-stars from "The Cosby Show," Phylicia Rashad and Malcolm-Jamal Warner.

First lady Michelle Obama and Jill Biden, the vice president's wife, were among those at the Kennedy Center watching clips from Cosby's long career - from his classic standup routine of a visit to the dentist to dealing with the stresses of raising a large family as a TV dad.

Seinfeld and Rock shared the stage and said they followed Cosby's comedy albums as children, which inspired their own careers. Then they got lost in banter about how they could never measure up.

"Me neither," Rock said.

By then, they had no choice but to toss to a clip of Cosby's dentist routine.

"The first thing he grabs is an iron hook," Cosby begins. "Then he starts to drill and you see and smell smoke coming out of your mouth!"

Critics always point out that "The Cosby Show," which aired in the 1980s, broke new ground because it was about a successful black family with a father who's a doctor and mother, a lawyer, coping with raising five children.

Of all his accomplishments as a comedian, actor, author and television producer, Cosby said he is most proud of the show, which he carefully crafted.

On the red carpet before the show, Sinbad said he has always looked up to Cosby for breaking racial barriers and creating new opportunities for black actors and comedians.

"First of all, to have a brother on TV - with 'I Spy' - with a white co-star, that was unheard of," Sinbad said, referring to Cosby's groundbreaking 1960s adventure show which co-starred Robert Culp.

Rashad flew from London where she is in rehearsals for "Cat on a Hot Tin Roof" to be part of the show at Cosby's request. She said she has vivid memories of the hit TV show.

"It was so much fun, it really was golden," she said on the red carpet. "I looked forward to waking up every morning and rushing to work."

On stage, she recalled the chemistry she and Cosby shared as TV parents.

"We could complete each other's sentences," she said.

Warner, who played son Theo on the show, said he has been in touch with his TV dad ever since. Now, he said he is far enough removed to watch himself in reruns and said the show is a testament to Cosby's genius.

"He always said in 20 years he wanted the show to still be relevant, and here we are," Warner said.

Cosby has won other major awards, including the Presidential Medal of Freedom in 2002. Still, the Mark Twain Prize is special, he said, because Twain was the "quintessential American writer - because he held his language and his love for words in perfect American form."

The tribute will air Nov. 4 nationwide on the Public Broadcasting Service. Cosby insisted the performances at the tribute be free of profanity and that the show reflect his emphasis on education.

"The show is very, very important to me," Cosby said in an interview. "It makes me aware that as a monologist and a writer and a performer, I've done some wonderful work."

Comedian Dick Gregory said after Cosby came on the scene with "I Spy" and with his standup, promoters never again referred to Gregory as a "Negro comic."