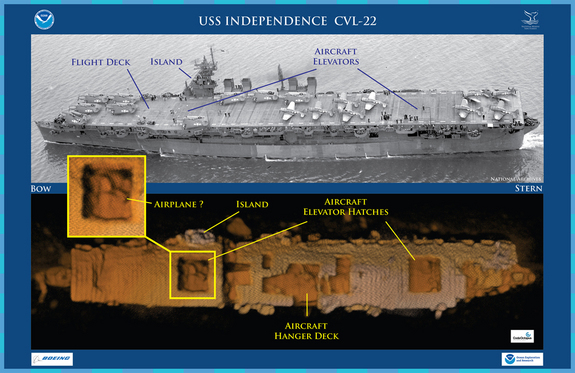 A team of underwater archaeologists has pieced together information from declassified government documents and a shipwrecked World War II-era naval vessel to understand the secret role played by one of the most historic U.S. aircraft carriers: the USS Independence.

The Independence (CVL 22) was one of 90 vessels assigned to Operation Crossroads -- the atomic bomb tests conducted at Bikini Atoll in the Marshall Islands -- but it was deliberately sunk, or scuttled, in 1951 and little was known about its career after the atomic bomb tests.

After discovering the location of the Independence shipwreck last year, researchers were able to compare sonar images of the wreck with declassified documents to uncover the carrier's use as a radiological laboratory and nuclear waste receptacle from 1946 to 1950.[See Images of the USS Independence Shipwreck and Dive Mission]

"Now we not only know what shape she's in and where she lies, but also exactly what happened to the Independence," said lead researcher James Delgado, a maritime archaeologist at the National Oceanic and Atmospheric Administration (NOAA).

History of a carrier

The Independence was among the first vessels that were converted to light aircraft carriers following the Japanese attack at Pearl Harbor. It operated in the central and western Pacific from November 1943 through August 1945, said Delgado. Following the war, the Independence was assigned to Operation Crossroads, where it was placed among a fleet of vessels within about 1,700 feet of the "ground zero" blast from the atomic bomb tests to examine the effects of shock waves, heat and radiation.

While 21 ships sank outright during the Bikini Atoll tests, the Independence survived, heavily damaged, and was returned to the United States.

Using the declassified documents, Delgado's team found that the ship was then used for decontamination studies. A memorandum to the Chief of Naval Operations from the Bureau of Ships and the Bureau of Medicine and Surgery notes that, "the intensity of the radioactive contamination acquired at Bikini has decreased during the intervening three years, so that many parts of the ship are now below the tolerance level established for peace-time industrial operations."

Yet, the government decided to establish the Naval Radiological Defense Laboratory on the ship and hauled more contaminated materials aboard for study, Delgado told Live Science. [7 Technologies That Transformed Warfare]

The laboratory provided the first training and teaching platform for the how to deal with the waste from the aftermath of an atomic explosion, Delgado said. Radiation levels were constantly monitored, and in 1949, four boilers, condenser units and steam turbines were removed from deep inside the ship's hull to clear more room for depositing radioactive waste, he added.

Sinking of the Independence

Additionally, the documents reveal that sinking the Independence served multiple functions for the U.S. Navy. The aircraft carrier was too old and too vulnerable to potential espionage to be used any further, explained Delgado. And when the decision was made to sink the ship, waste from other Operation Crossroads vessels and the University of California Radiation Laboratory was also removed to the Independence "for ultimate sinking with that vessel because of lack of adequate storage facilities," according to one of the memorandums.

The Navy used two precisely placed torpedo warheads close to the ship's keel area, away from where the waste was stored, to sink the ship in January 1951. A memorandum from the Radiological Safety Officer to the Commander of the Task Group noted that all radiological safety precautions had been followed as per orders, and that "all surfaces that had been exposed to possible contamination were scrubbed clean."

"Independence, by the time it was sunk, was at about a level that you would get with an average X-ray," Delgado said. Anything that might potentially be an issue was enclosed in steel and concrete drums deep inside the ship, he explained, and seeing that the wreck was still intact underwater was reassuring, although the researchers would like to continue monitoring the Independence because of its radiation legacy.

"This remains one of the most compelling frontiers in science, given not only the size of the oceans but what rests within them," Delgado said.

Details of the expedition and declassified documents were published online April 21 in the Journal of Maritime Archaeology.