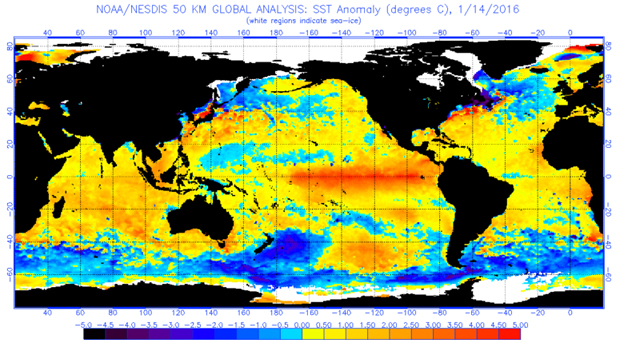 This winter's unusually powerful El Niño -- already blamed for big storms on the West Coast and freakishly warm weather in the East -- still has a lot more life in it, meteorologists say.

The latest update from the National Oceanic and Atmospheric Association (NOAA) says main brunt of El Niño's impact will continue to be felt over the next few months in the United States, where prime El Niño season runs from January through March. In other areas of the world, the system calming down.

According to a NOAA blog post, there's likely to be more than the median amount of precipitation across the southern tier of the U.S. from January through March, while the northern tier experiences a drier winter. Above-average temperatures are likely in the West and northern half of the country, with below-average temperatures in the southern Plains and along the Gulf Coast.

El Niño is finally expected to weaken and peter out during the spring, transitioning to what's called ENSO (El Niño/Southern Oscillation)-neutral status heading into the summer.

El Niño has also been leaving a mark elsewhere in the world. For instance, there was much more rain than normal in eastern Africa from October through December, while southern Africa experienced continued dry conditions.