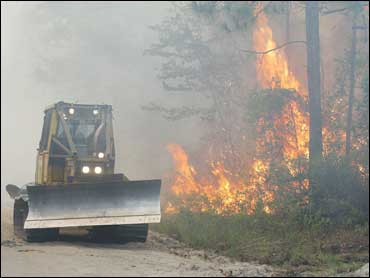 A second wildfire in the Okefenokee Swamp has burned more than 100,000 acres, rivaling in just five days the vast record-setting fire that has scorched southeast Georgia for more than three weeks, firefighters said Thursday.

The rapidly growing fire, fed by fast-burning swamp grasses, had been reported at just 68,650 acres Thursday morning. Though mostly well within the swamp, it was spreading mostly to the west toward the town of Fargo, a tiny city of 380 about eight miles west of the swamp.

Firefighters didn't know the exact acreage of the blaze, ignited Saturday by a lightning strike in the Okefenokee National Wildlife Refuge.

But Mark Ruggiero, commander of the joint team battling the swamp blazes, said the fire had grown larger that the 116,480-acre fire burning since April 16 that was the largest wildfire on record in Georgia.

"It's still in the refuge, but getting real close to breaking the perimeter," he said.

Bobby Kitchens, a firefighting operations chief, said the younger fire likely grew so quickly because it's burning in the southern part of the swamp where a 2002 wildfire consumed much of the brush, leaving mostly grasses that burn more rapidly.

The older fire, burning about two miles north of the refuge headquarters, has slowed somewhat as it has entered an area of wetter swamp prairies.

Georgia and Florida have been battling wildfires for weeks, with nearly 300 square miles charred as a drought has left the land tinder-dry.

Smoke-filled air created a burning smell and a dusting of ashes that coated cars and buildings through much of Florida and southeastern Georgia. The haze over Florida forced the closure of several highways.

Health officials warned the elderly, small children and people with breathing problems to stay indoors, although some areas were not as smoky Thursday. No one has died in the fires and just one firefighter had minor injuries.

Authorities has been hoping the year's first named storm would bring rain. But the remnants of Subtropical Storm Andrea were not promising much rainfall relief — only up to an inch was expected. Instead, they brought higher winds.

A wildfire in Baker County, which started when one of the Georgia fires jumped the St. Mary's River, kept residents of the tiny community of Taylor away from their homes for a third day.

Robin Arabie can see her home from the corner store, but can't go back because the fire is still running wild in the forest behind it.

"I took all my animals. Then I came back and got my photos and a couple changes of clothes for everybody," she told Cobiella.

Georgia officials issued a mandatory evacuation in southern Charlton County, saying about 300 homes may be in the path of the state's largest wildfire since 1957, when record-keeping began. It started April 16 when a tree fell on a power line near Waycross, Ga., and has burned 116,480 acres — or 182 square miles — of forest and swampland.

Most of Florida's wildfires have been started by lightning, although the Division of Forestry was investigating nine suspected cases of arson.

(Getty Images)
A mandatory evacuation order around the area of the landmark Gunflint Lodge, just east of the scenic Gunflint Trail (left)that leads from Grand Marais into the wilderness, was extended Thursday evening another 9 miles east to the area around the Poplar Lake Fire Hall, according to the Minnesota Interagency Fire Center

Bill Paxton, a spokesman for the firefighting effort, said the fire was "challenging" the containment lines. "They're holding right now," he said. "We're having some difficulty holding them, but they're holding now."

The fire had burned more than 45 square miles and destroyed about 45 structures since it started Saturday. The shifting winds Thursday put another 100 buildings at risk, fire officials said.

At the Trail Center Lodge, it was a chaotic scene after the owners were they had to leave, even though they'd had a sprinkler running to help protect the property. They rushed to pull down items from the walls, densely packed with everything from trophy fish to zany bumper stickers to a moosehead.

Kary Graham, a niece of the owners, pulled an armadillo off a shelf and joked, "Hey, I saved the armadillo!" Moments later, she began tearing up over a wall plastered with snapshots. She was told not to save the pictures.

"This is the hardest part," Graham said as she looked at the wall of photos.

A squad of elite firefighters was taking command of the blaze, which had burned its way into Canada. Nearly 450 firefighters were on the scene Thursday.