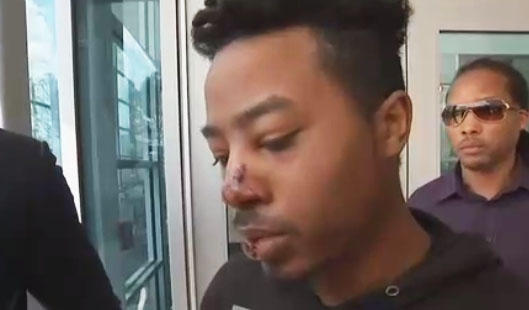 ATLANTA -- Two Georgia police officers were fired Thursday, a day after authorities say one punched a man who had his hands up and the other kicked the man in the head once he was handcuffed on the ground.

Several hours later, police said that supervisor, Sgt. Michael Bongiovanni, had also been fired after a second video surfaced of him punching Hollins in the face as Hollins put his hands in the air.

“We acknowledge that the actions of these two officers have implications that will be felt for some time,” a police department statement says. “However, we also believe that our decisive action in terminating both officers speaks volumes about what is expected of each officer that wears a Gwinnett County Police badge.”

The department also has opened criminal investigations into the behavior of the two officers. The results will be turned over to the county district attorney, who will decide whether to prosecute them.

No working number could be found for McDonald, and the voicemail at a number listed for Bongiovanni was full. It wasn’t immediately clear whether either man had an attorney who could comment.

Video filmed by a witness shows Bongiovanni punching Hollins as Hollins stands with his hands up after getting out of the car, police said.

The other video shows Bongiovanni appearing to yell at a handcuffed man who then lies face-down in a left-turn lane of the busy intersection. McDonald runs up and immediately appears to stomp on the man’s head before both officers eventually pull him to his feet.

Hollins, 21, appears to have blood on his nose and lip in his booking photo.

The shift commander initiated an “immediate investigation” and placed McDonald on administrative leave after Hollins’ arrest.

Hollins was driving a red Acura Integra with no license plate and a brake light that didn’t work, and switched lanes three times without signaling, according to an incident report filed by Bongiovanni.

Hollins yelled and began to “act strange,” and based on that and the officer’s recollection of Hollins’ behavior during a previous arrest in August, Bongiovanni called for backup, the report says.

The report mentions McDonald arriving after Bongiovanni had used his stun gun on Hollins and gotten him handcuffed on the ground. It doesn’t mention any contact between McDonald and Hollins.

The two officers are white and Hollins appears to be black, police Cpl. Michele Pihera said in an email.

“All I could say is, I wish this never happened to me,” he remarked to reporters, including one from WGCL.

Police released McDonald’s personnel file Thursday, and Bongiovanni’s was to be released.

McDonald was “an excellent example of a team player with a strong work ethic” who completed his work on time, was always willing to help others and was courteous and professional with the public, Bongiovanni wrote in annual evaluation last June. He gave McDonald a rating of “often exceeds expectations” in many categories and no rating lower than “generally meets expectations.”

McDonald received a few commendations and recognitions, including sharing the officer of the month honor in November 2015.

He had filed three use-of-force reports explaining why he used his stun gun or physical force in the course of his duties.

He faced a disciplinary loss of his good driving record after he rear-ended another car in his patrol car in June 2015. But the officer who responded to the accident said in a letter to the department’s safety review committee that it would have been very difficult for McDonald to avoid the wreck.