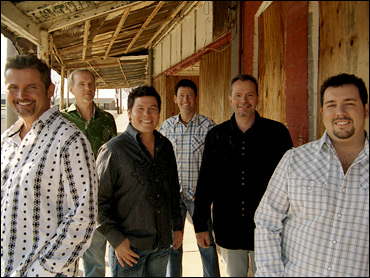 When The Grascals got the nod from country legend Dolly Parton, audiences knew that the contemporary bluegrass and country band was the real deal.

Formed by Nashville musicians, The Grascals began to tour with Parton in the fall of 2004.

The following year they graced the stage during Parton's notable, sold-out concert at Radio City Music Hall in New York, which generated even more buzz in the bluegrass and country world.

The Grascals then went on a tremendous musical journey to share the stage with an impressive roster of musicians, including Brooks & Dunn, Dierks Bentley, Patty Loveless, Mac Wiseman, J. D. Crowe, Charlie Daniels, Kenny Rogers, Steve Wariner, Vince Gill and the Jordanaires, among others.

The band stopped by the The Early Show's "Second Cup Cafe" Saturday to perform music from their latest album, "Keep On Walkin'."

Keeping up with the times and staying true to their traditional bluegrass and country roots, the band received Grammy nominations for their first two highly-successful releases, "The Grascals" and "Long List of Heartaches."

In 2006, their self-titled debut, "Me and John and Paul," was a huge hit. Although simply titled, it was nothing of the sort; it was honored with Album of the Year and Song of the Year.

In 2007, The Grascals earned a Dove Award nomination for Bluegrass Recorded Song of the Year for "Did You Forget God Today," featuring the Jordanaires, which is included on "Long List of Heartaches."

"Keep On Walkin'," which includes a duet "Sad Wind Sighs" with country star Vince Gill, will be released on July 15.
By Melissa Castellanos