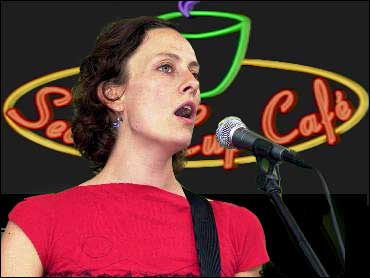 Sarah Harmer is a Canadian folk singer who is making it big in America and beyond.

The folk rocker and her band stopped by The Saturday Early Show's Second Cup Café to perform songs from her new album, "All of Our Names," which was mostly written at her rural home near Kingston, Ontario.

The singer/songwriter, whose voice Rolling Stone described as "marvelously compelling," first captured music lovers' attention with her 2000 release of "You Were Here."

The youngest of six children born to farmer Clem Harmer and his teacher wife, Isabelle, Sarah Harmer grew up on a 100-acre farm near Hamilton, Ontario. After a stint with the Saddletramps, the singer formed her own band, Weeping Tile, while at college in Kingston, Ontario.

The group recorded three albums before Harmer recorded a collection of country and jazz favorites – a gift to her father for Christmas. The project kick-started Harmer's solo career, and led to the making of her album, "You Were Here."

Harmer's "All of Our Names," is a collection of songs with rich narratives about emotions, living life and meeting potentials.