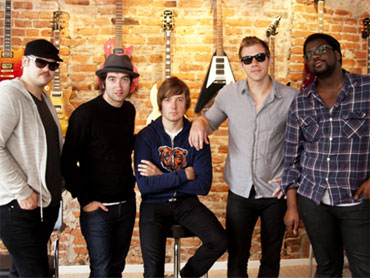 With Christmas just a week away, what better way to get all warm and fuzzy than with the pop/rock band Plain White T's, who has a lot of faith - especially when it comes to love.

The multi-platinum selling band released their highly anticipated new album, "Wonders of the Younger" earlier this month. There's even buzz that their lead single, "Rhythm of Love" will be comparable to their wildly successful hit tune, "Hey There Delilah."

The theme of "Rhythm of Love" is reminicsent of "Hey There Delilah," and "1,2,3,4," which combined have sold over 5 million copies. "Rhythm of Love" was also written to impress a real girl in an effort to try to win her back - but it doesn't get her back in the end.

The band stopped by "The Early Show on Saturday Morning"'s "Second Cup Cafe" to perform "Rhythm of Love" as well as "Christmas Won't Be The Same Without You."

Plain White T's is changing things up this time, however - "Rhythm of Love" is the first song by the group that Tom Higgenson doesn't sing. It's written and sung by guitarist Tim Lopez. Higgenson sings harmony on the track.

The band hails from Chicago, except for guitarist Tim Lopez, who is from Santa Barbara, Calif. They came together in 1997, a full ten years before the acoustic ballad "Hey There Delilah" made them Grammy-nominated stars.

How did they come up with the name, Plain White T's?

While ordinary to some, lead singer Tom Higgenson saw more meaning behind Plain White T's. The name was inspired by his favorite albums that feature the artists wearing plain white T-shirts in their photographs.