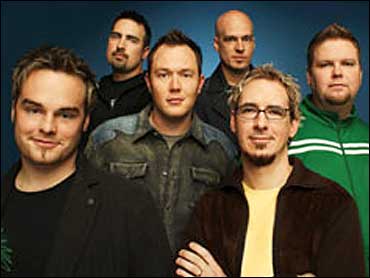 MercyMe first hit it big in the Christian music scene. But the band turned into a crossover success with its 2001 single, "I Can Only Imagine."

Since then, the Dallas-based rockers have sold more than 4 million albums and amassed a string of chart-topping hits.

The band is made up of six members: Bart Millard, lead singer; Jim Bryson, keyboards; Robby Shaffer, drums; Mike Scheuchze, guitar; Barry Graul, guitar; and Nathan Cochran, bass. They've come a long way from their original ambition, which was simply to cover the costs of raising their growing families. In fact, Bart's grandmother provided the inspiration for the band's name. During a conversation about his career, she said to him, "Mercy me, you need to get a real job."

The rest is history.

This week, MercyMe released its fifth studio album, called "Coming Up To Breathe." The group celebrates the occasion with a visit to The Saturday Early Show.