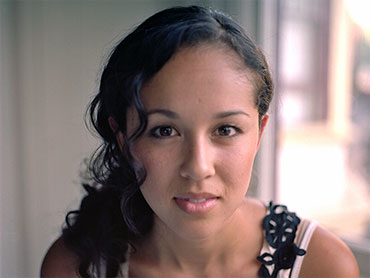 Indie-pop songstress Kina Grannis gained fans across the nation after she won the "Doritos Crash the Super Bowl" contest in 2008.

Her music video was seen by nearly 90 million viewers when it aired during the big game, leading to a record deal.

Grannis wound up walking away from the label deal, opting to put out the music herself and retain 100 percent freedom to make her music the way she wants.

Sticking to her guns turned out to be one of the best career decisions she's made.

Since then, Grannis has released her first full-length album, "Stairwells," which broke into the Billboard 200 and made it to No. 5 on the Billboard Top Internet Albums chart, as well as No. 2 on Billboard's Heatseekers Chart - none-too-shabby for taking risks and branching out on her own!

The 24-year-old singer-songwriter stopped by "The Early Show on Saturday Morning"'s "Second Cup Cafe" to perform a cover of Nickel Creek's "When You Come Back Down," along with her first single from the album, "Valentine."

Grannis, a 2007 University of Southern California grad who got her start on YouTube, has a stellar online presence, and her audience continues to grow. She's garnered 3.5 million plays on MySpace and 39 million views on YouTube.

In addition, her "Valentine" video has been viewed more then 2.1 million times on YouTube.

Grannis is now embarking on a sold-out headlining tour of the U.S. in conjunction with the release of the debut album.