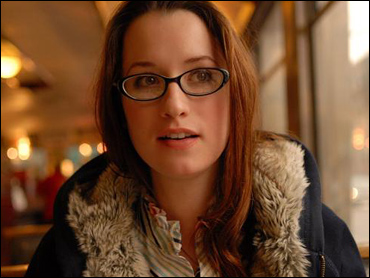 Some may know of up-and-coming singer/songwriter Ingrid Michaelson from the Old Navy ad in which her song "The Way I Am" creates a mellow, melodic backdrop amid beautiful people wearing beautiful sweaters.

Although her lyrics, "If you are chilly, here, take my sweater" are more than appropriate for the ad, there's a lot more to Michaelson than just a catchy tune for TV.

Michaelson, a native of the New York City borough of Staten Island, has made a name for herself with her quirky indie/pop/folk rock music that grabs listeners with its touching simplicity.

The 29-year-old homebody - who's lived with her parents for most of her life - has experienced a whirlwind of offers and recognition everywhere, from VH1's "You Oughta Know: Artists On The Rise" and Old Navy to The WB's "One Tree Hill" and ABC's "Grey's Anatomy."

Several of Michaelson's songs have been featured on "Grey's Anatomy," such as "Breakable," "The Way I Am" and "Corner Of Your Heart." "Keep Breathing" was specially created for "Grey's Anatomy"'s season finale in 2007.

In celebration of Project Sunshine week starting May 12, Michaelson will perform for children at Mt. Sinai Hospital and at the organization's annual fundraising gala at the Waldorf Astoria.

Project Sunshine is a nonprofit organization that provides free social, educational and recreational programs to children living with medical challenges and their families.

This summer, Michaelson will also support The Dave Matthews Band, whose tour will run from May to August.
By Melissa Castellanos