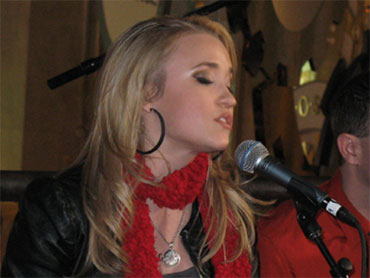 You may know her as the spunky best friend of Miley Cyrus on the hit show, "Hannah Montana."

But Emily Osment is branching out on her own musically with the recent release of her first solo CD, "All The Right Wrongs."

"All The Right Wrongs," debuted No.1 on the Billboard's Heatseekers chart.

The talented actress, singer and songwriter stopped by "The Early Show Saturday Edition"'s "Second Cup Cafe" to perform her hit single, "All The Way Up," which is currently in the Top 10 at Radio Disney. She also along performed a holiday treat, "Run Rudolph Run."

Although she is no longer in Cyrus' shadow, playing her best friend, Lilly Truscott, Osment has been recognized for her friendly and loveable role. She recently won "Best Sidekick" at the Teen Choice Awards and was nominated for a People's Choice Award.

Her brother, actor Haley Joel Osment, has starred a number of films, including "The Sixth Sense," and also loves music. While growing up, the Osments were surrounded by music - mostly classic rock and roll.

"My brother got his first electric guitar when he was 13 and the house was never quiet again," Osment said on her official Web site.

The 17-year-old is now bringing the noise and has come a long way for such a young artist.