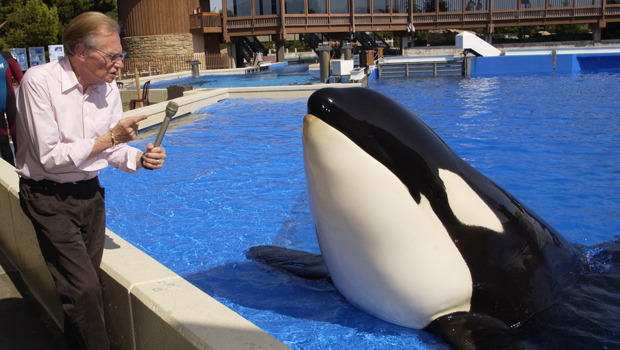 NEW YORK The company famous for water shows featuring killer whales, dolphins and other animals at SeaWorld said Thursday that it is planning to go public. SeaWorld Entertainment has filed for an initial public offering of stock aimed at raising $100 million. That number is likely to change as the company's bankers gauge interest from investors.

From its origins as a Busch Gardens animal park at Anheuser-Busch's Tampa Budweiser brewery, the company has grown to span 11 theme parks housing 67,000 animals. Besides the three SeaWorld parks, the company owns two Busch Gardens parks and Sesame Place, an amusement park based on the children's TV show Sesame Street.

The company warns that its business is dependent on customers' willingness to spend on leisure and entertainment - which may be a tough proposition in a still-weak U.S. economy. Still, SeaWorld's revenue has risen in the three years that it's been owned by private equity firm Blackstone Group (BX). The company has looked for ways to stay competitive in the current market, branching out this year with a Saturday morning television show, "Sea Rescue," on the ABC network to attract young viewers.

Blackstone is expected to sell some of its stock in the IPO but keep a majority stake, SeaWorld said in a filing with the Securities and Exchange Commission. SeaWorld plans to use money raised in the IPO to pay down debt and make a payment to the New York-based firm.

How Burger King is revamping its menu

Anheuser-Busch started Busch Gardens in Tampa in 1959. The beer company bought SeaWorld, whose park opened in San Diego in 1964, in 1989. SeaWorld is now based in the theme park mecca of Orlando, Florida, also home to Walt Disney Co.'s Walt Disney World resort and Universal Studios. More than half of the company's revenue is generated in Florida.

SeaWorld said about 24 million people attended its 11 parks during the 12 months ended Sept. 30. The company did not disclose how that figure has grown or shrank in the past few years, but says it has a "stable attendance base." In the first nine months of 2012, SeaWorld's profit jumped 73 percent to $86.2 million from $50 million a year earlier, as revenue rose nearly 8 percent to $1.16 billion.

Some of the company's competitors have had a difficult climb back from the recession. Amusement park operator Six Flags Entertainment Corp. filed for bankruptcy protection in 2009, emerging in mid-2010. It has been growing revenue since then, although it posted a loss in 2011.

SeaWorld, which plans to trade under the ticker "SEAS" on the Nasdaq, did not name a date for its IPO or detail how many shares will be sold, and at what price, in its filing with regulators. But SeaWorld did warn investors of the risks involved with having its animals interact with human visitors, noting that accidents could hurt its parks' reputation and attendance. In 2010, a trainer at its SeaWorld Orlando park was killed by an orca, or killer, whale. Last month an 8-year-old Georgia girl said a dolphin at the same Orlando park bit her hand while she fed the animal as part of an attraction.