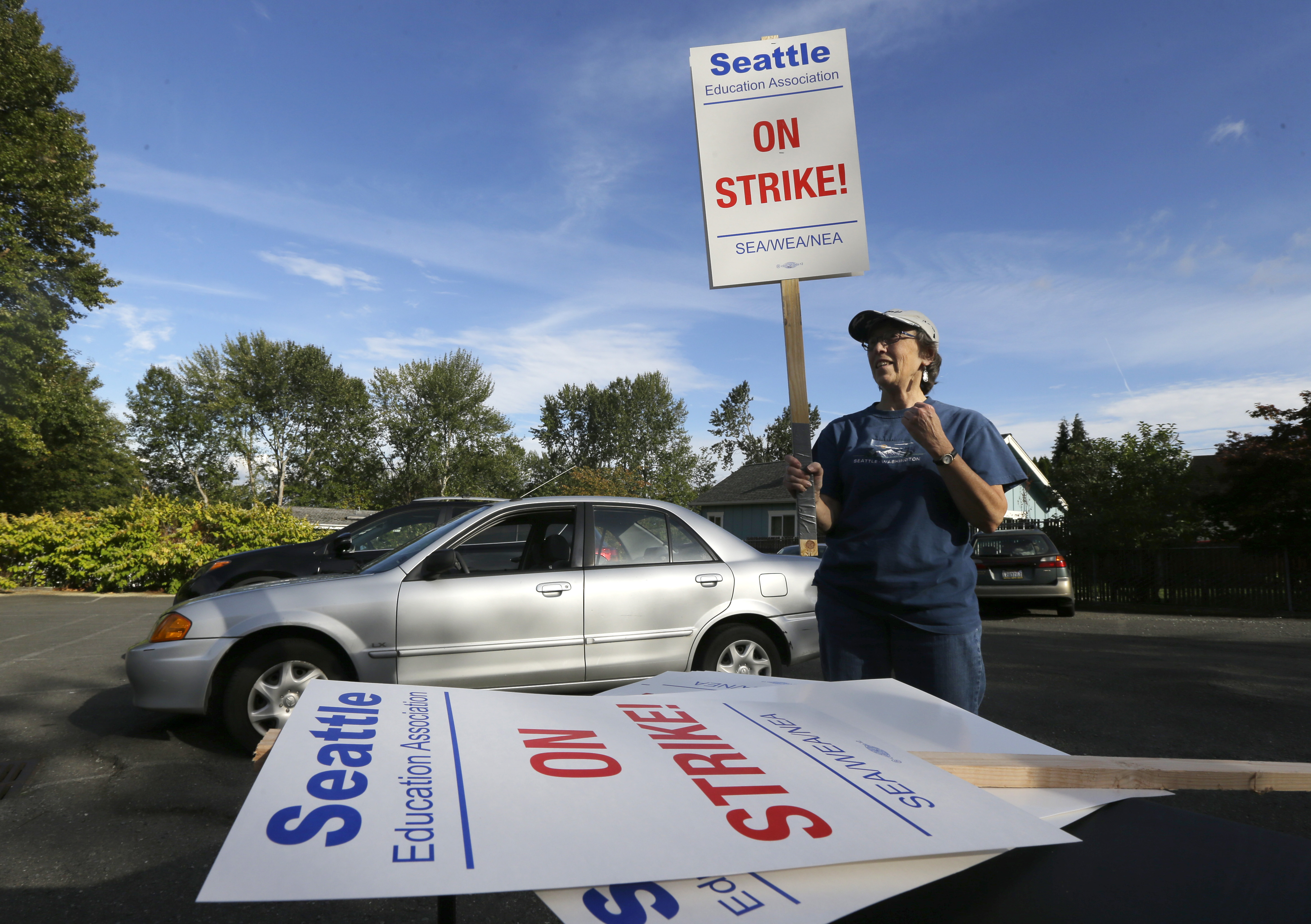 SEATTLE -- Teachers in Seattle will walk picket lines Wednesday after last-minute negotiations over wages and other issues failed to avert a strike in Washington state's largest school district.

Phyllis Campano, the union's vice president, said Tuesday night that the district came back with a proposal that the union "couldn't take seriously," and they decided to end for the night.

School was set to begin Wednesday for 53,000 Seattle Public Schools students. Members of the Seattle Education Association, which represents about 5,000 teachers and support staff, plan to picket at all schools. The union voted to walk out last week if a tentative agreement wasn't reached by the first day of school.

"Nobody really wants to strike, but at this point the school board has not come to the table with a serious proposal to get it done," Campano said.

Both sides remained far apart on several key issues, including pay raises, teacher evaluations and the length of the school day. The union has asked for an 18 percent raise over three years, in addition to a state-approved 3 percent cost-of-living increase. The district's latest wage proposal offers nearly 9 percent over three years.

Public school teachers in Washington last got a cost of living increase from the state six years ago, according to CBS News affiliate KIRO.

Seattle parents were scrambling to come up with options ahead of the decision. The city parks department was expanding before- and after-school care programs into all-day offerings because of the strike, and some community centers were also opening their doors.

Seattle isn't the only district facing a teacher labor action. Teachers in Pasco in southeast Washington have voted not to return to the classroom despite a court order to end a strike. In Pasco, teachers decided Monday night to remain on strike, idling 17,000 students on Tuesday in a dispute over pay and curriculum.

The strikes are happening at a time when Washington officials are under increasing pressure to increase the amount of money the state spends on K-12 education.

Washington state is being sanctioned $100,000 a day by the state Supreme Court because justices say lawmakers have failed to adequately pay to educate the state's 1 million school children. The court has said the money is to be put in a segregated fund for education.

Lawmakers have allocated billions of dollars toward public schools, but critics say that's not enough to meet the requirements in the state Constitution that education be the Legislature's "paramount duty."

The Washington Supreme Court decided in 2012 that state funding for education is not adequate. The justices said the state was relying too much on local dollars to make up for an inadequate state budget for education. Overreliance on local dollars makes the inequity worse because school districts with higher property values can raise more money more easily.

Rich Wood, a spokesman for the Washington Education Association, said the strikes were mainly about local issues not tied to the larger state debate about funding.

"The negotiations are about meeting the needs of students in school districts," Wood said. He noted that teacher strikes are relatively rare in Washington, with the last major one in 2011 in Tacoma. The state has 295 school districts.