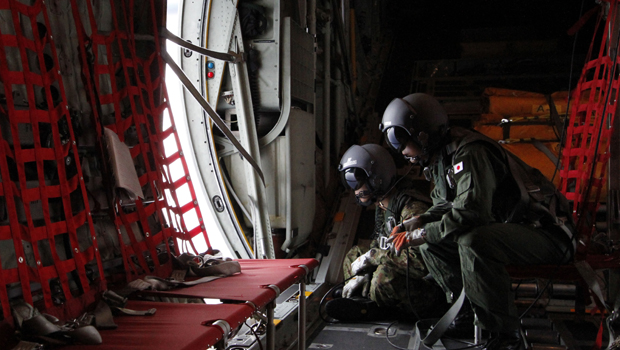 PERTH, Australia - Aircraft and ships from China headed to the desolate southern Indian Ocean to join the search for Malaysia Airlines Flight 370, now lost for two full weeks, and Australia promised its best efforts to resolve "an extraordinary riddle."

A satellite spotted two large objects in the area earlier this week, raising hopes of finding the Boeing 777 that disappeared March 8 with 239 people on board. Three Australian planes took off at dawn Saturday for a third day of scouring the region about 1,550 miles southwest of Perth.

Australian officials tried to tamp down expectations after a fruitless search Friday, even as they pledged to continue the effort.

"It's about the most inaccessible spot that you could imagine on the face of the Earth, but if there is anything down there, we will find it," Prime Minister Tony Abbott said at a news conference in Papua New Guinea.

"We owe it to the families and the friends and the loved ones of the almost 240 people on Flight MH370 to do everything we can to try to resolve what is as yet an extraordinary riddle," he added.

While the Orions are only able to search for two hours at a time, the commercial jets can stay in the search area for five hours before they must head back to the base.

Two merchant ships were in the area, and the HMAS Success, a navy supply ship, was due to arrive late Saturday afternoon. Weather in the search zone was expected to be relatively good, with some cloud cover.

Two Chinese aircraft were expected to arrive in Perth on Saturday to join the search, and two Japanese aircraft will arrive Sunday. A small flotilla of ships from China is still several days away.

AMSA officials also were checking to see if there was any new satellite imagery that could provide more information.

In Kuala Lumpur, where the plane took off for Beijing, the country's defense minister thanked more than two dozen countries involved in the search that is stretching from Kazakhstan in Central Asia to the southern Indian Ocean, and said the focus remains on finding the airplane. "This going to be a long haul," Hishammuddin Hussein told a news conference.

Malaysia Airlines meanwhile issued a statement saying that lithium ion batteries the plane was carrying complied with international standards that would classify them as non-dangerous goods.


The search area indicated by the satellite images in the southern Indian Ocean is a four-hour round-trip flight from western Australia, leaving planes with only enough fuel to search for about two hours. The images were taken March 16, but the search in the area did not start until Thursday because it took time to analyze them.

Searchers on Friday relied mostly on trained spotters aboard the planes rather than radar, which found nothing Thursday, Australian officials said. The search will focus more on visual sightings because civilian aircraft are being brought in. The military planes will continue to use both radar and spotters.

"Noting that we got no radar detections yesterday, we have re-planned the search to be visual. So aircraft flying relatively low, very highly skilled and trained observers looking out of the aircraft windows and looking to see objects," said John Young, manager of the maritime safety authority's emergency response division.

"CBS This Morning" contributor Michio Kaku, a physics professor at the City University of New York, said the area is "quite turbulent, and even a gentle current of five miles an hour could carry debris of hundreds of miles across."

The search is a "literal race against time," according to Kaku. "The black box has a beacon, but that beacon has a battery -- a battery with a life 30 days," he explained. "And we've already lost two weeks, so of the window of opportunity is closing very rapidly."

Malaysia asked the U.S. for undersea surveillance equipment to help in the search, said Rear Adm. John Kirby, a Pentagon spokesman. Defense Secretary Chuck Hagel promised to assess the availability of the technology and its usefulness in the search, Kirby said.

The Pentagon says it has spent $2.5 million to operate ships and aircraft in the search and has budgeted another $1.5 million for the efforts.

There is a limited battery life for the beacons in the cockpit-voice and flight-data recorders - about 30 days, said Chuck Schofield, vice president of business development for Dukane Seacom Inc. He said it's "very likely" that his company made the beacons on the missing jet.

The devices work to a depth of 20,000 feet, with a signal range of about two nautical miles, depending on variables like sea conditions. The signals are located using a device operated on the surface of the water or towed to a depth.

Experts say it is impossible to tell if the grainy satellite images of the two objects -- one almost 80 feet long and the other measuring 15 feet -- were debris from the plane. But officials have called this the best lead so far in the search that began March 8 after the plane vanished over the Gulf of Thailand on an overnight flight to Beijing.

For relatives of the people aboard the plane -- 154 of the 227 passengers are Chinese - hope was slipping away, said Nan Jinyan, sister-in-law of passenger Yan Ling.

"I'm psychologically prepared for the worst and I know the chances of them coming back alive are extremely small," said Nan, one of dozens of relatives gathered at a Beijing hotel awaiting any word about their loved ones.

The Norwegian cargo vessel Hoegh St. Petersburg is also in the area helping with the search. The ship, which transports cars, was on its way from South Africa to Australia.

Haakon Svane, a spokesman for the Norwegian Shipowners' Association, said the ship and its crew of 20 Filipinos had searched a strip of ocean stretching about 100 nautical miles or 115 miles using binoculars and unaided eyes.

Pieces of an aircraft have been found floating for days after a crash into the ocean. Peter Marosszeky, an aviation expert at the University of New South Wales, said the plane's wing could remain buoyant for weeks if the fuel tanks inside were empty and had not filled up with water.

Other experts said that if the aircraft breaks into pieces, normally only items such as seats and luggage would remain floating.

"We seldom see big metal (pieces) floating. You need a lot of (buoyant) material underneath the metal to keep it up," said Lau Kin-tak, an expert in aircraft maintenance and accidents at Hong Kong Polytechnic University.

The anguished relatives of passengers met Friday with Malaysian officials at the Beijing hotel. Attendees said they had a two-hour briefing about the search but that nothing new was said.

Wang Zhen, son of missing artist Wang Linshi, said there were questions about why Malaysian authorities had provided so much seemingly contradictory information.

Wang said he still has hopes his father can be found alive and is praying that the satellite sightings turn out to be false. He said he and other relatives are suspicious about what they are being told by the Malaysian side, but are at a loss as to what to do next.

"We feel they're hiding something from us," said Wang, who is filling his days attending briefings and watching the news for updates.

Police are considering the possibilities of hijacking, sabotage, terrorism or issues related to the mental health of the pilots or anyone else on board.