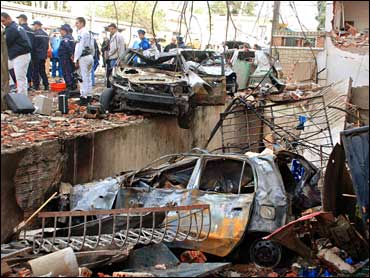 Emergency workers searched for bodies and survivors Wednesday after twin truck bombings by an affiliate of al Qaeda targeted U.N. offices and a government building in Algiers, killing at least 30 people.

Algerian Foreign Minister Mourad Medelci said on France's Europe-1 radio Wednesday morning that the official death toll was 30, up from 26 Tuesday night, after emergency workers spent the night delving beneath the remains of gutted buildings for victims.

As many as 11 U.N. workers, possible more, were killed, U.N. officials said.

It described the U.N. offices as "the headquarters of the international infidels' den." The other target, Algeria's Constitutional Council, rules on the constitutionality of laws and oversees elections.

The targeting of United Nations offices was a new development in Algeria's 15-year battle against Islamic insurgents, who previously focused their hate on symbols of Algeria's military-backed government and civilians.

U.N. officials in Geneva said it was the worst single attack against United Nations staff and facilities since August 2003, when the global body's headquarters in Baghdad were hit by a truck laden with explosives. That attack killed 22 people, including the top U.N. envoy, Sergio Vieira de Mello, and was blamed on al Qaeda fighters in Iraq.

After Tuesday's attack in Algiers, U.N. Secretary-General Ban Ki-moon called for an immediate review of U.N. security precautions and policies in Algeria and elsewhere.

The U.N. offices are in the upscale Hydra neighborhood of Algiers, which houses many foreign embassies and has a substantial foreign population.

(CBS)
The U.S. Embassy said it was "implementing more robust security procedures while we assess the current security situation," according to a statement on its Web site. The Embassy was open Wednesday.

The French Embassy urged "great vigilance" and said that though violence had largely died down in recent years, "recent attacks show that it is time for a return to the most extreme prudence."

"The renewed threat by al Qaeda against French interests in North Africa cannot be ignored," the embassy said on its Web site.

Algerian Interior Minister Noureddine Yazid Zerhouni said the government was "certain" that al Qaeda's North Africa affiliate - formerly known as the Salafist Group for Call and Combat, or GSPC - "was behind the attack."

Tuesday's bombings came amid an increasing campaign of violence (Click for timeline) by the North African franchise of Osama bin Laden's terror group.

Al Qaeda's media operation released a half-hour long video on Nov. 3, 2007, obtained by CBS News, titled, "Unity of the Ranks," featuring an audio statement by the group's second in command, Ayman Zawahiri, and a and field commander with ties to North Africa, Abu Laith al-Libi.

In the tape, Zawahiri called for attacks on Western interests throughout North Africa, and urged militants to overthrow the leaders of Algeria, Libya, Tunisia, and Morocco.

Fighters arrested after previous Algerian bombings in April had identified the U.N. offices and the council building as future targets, Zerhouni said, according to the official APS news agency.

The Interior Ministry said Tuesday night that 26 had died and that 177 people were wounded. The foreign minister said Wednesday that 26 remained in hospitals for further treatment.

Other sources said the toll was higher. An official at the civil protection agency said 45 people were killed. A doctor at an Algiers hospital who said he was in contact with staff at other area hospitals said the death toll was at least 60.

At least 11 United Nations employees were believed to have been among those killed, U.N. deputy spokeswoman Marie Okabe said in New York on Tuesday night.

Al Qaeda in Islamic North Africa is thought to have only several hundred fighters but has resisted Algerian security sweeps. Its members have rejected amnesty offers and have turned their sights from toppling the government to waging holy war and fighting Western interests.

Algeria has been battling Islamic insurgents since the early 1990s, when the army canceled the second round of the country's first multiparty elections, stepping in to prevent likely victory by an Islamic fundamentalist party.

Islamist armed groups then turned to force to overthrow the government, with up to 200,000 people killed in the ensuing violence.