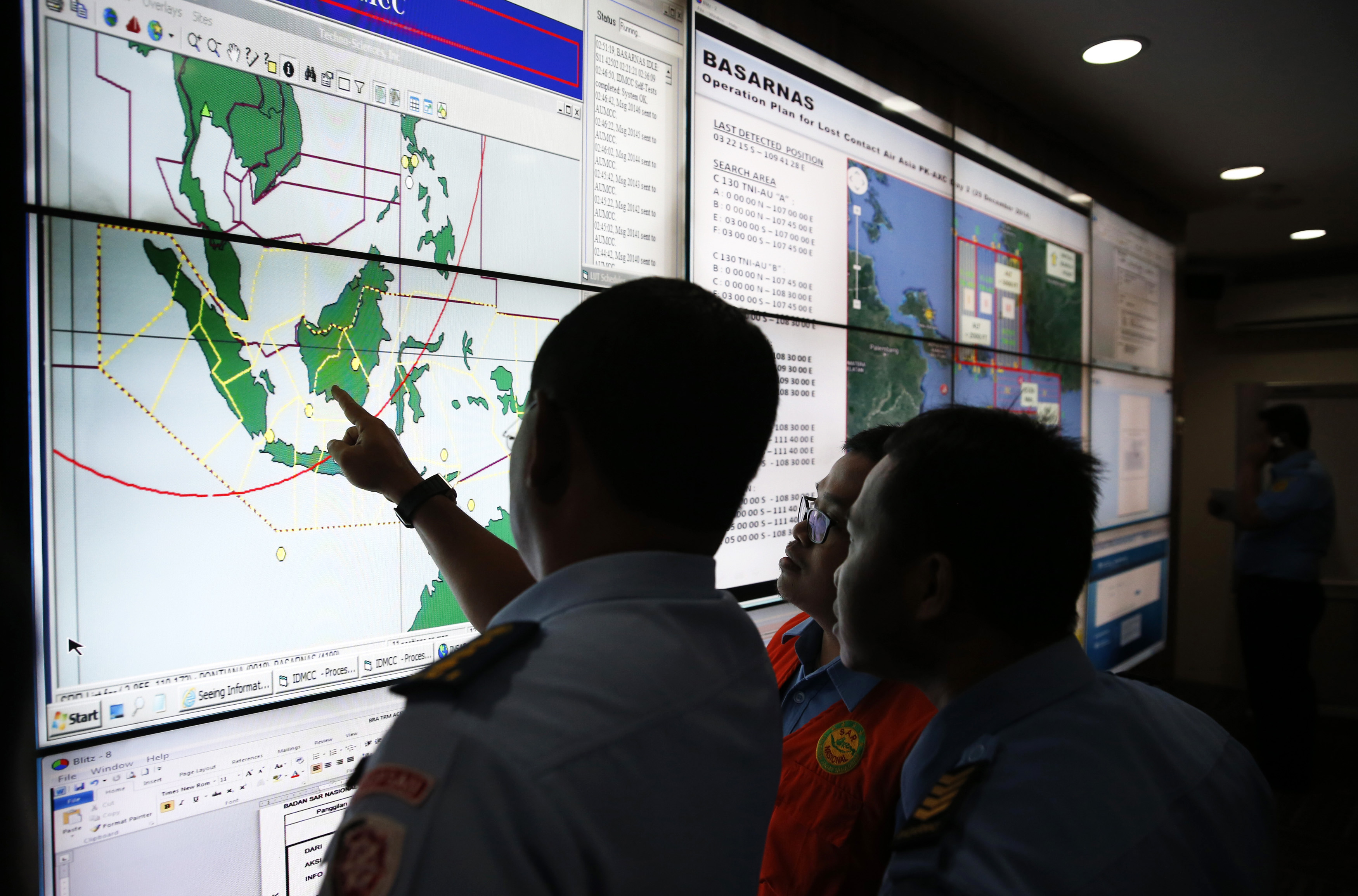 SURABAYA, Indonesia -- The search has resumed for the missing AirAsia Flight 8501 plane that is believed to have crashed into Indonesia's Java Sea, Sunday morning. Searchers continued looking for the aircraft Tuesday, with the search area widened in hopes of finding the airliner and its 162 passengers.

On Tuesday, an Indonesia National Search and Rescue spokesman said several pieces of debris had been spotted floating in the sea off Borneo island that might be linked to the missing jetliner. Yusuf Latif said an Indonesian military aircraft saw white, red and black objects, including what appeared to be a life jacket, off the coast, about 105 miles south of Pangkalan Bun. The agency dispatched at least one helicopter to pick up the items and take them to the search and rescue coordination post on Belitung Island.

The Reuters news agency says Indonesian television showed footage Tuesday of objects floating in the Java Sea that an official said could be part of the AirAsia jet. Indonesian TV showed two relatively large objects, one orange and one grey or brown, floating on the surface. The largest appeared to be several yards long.

Also, Dr. Max Ruland, Director of Operations for the search and rescue mission, confirmed to CBS News that two Cessna jets have been dispatched to check on reports of smoke on an island in the search zone, which is larger than the state of California.

The debris and smoke reports are the latest lead in an a multinational search effort for the missing plane concentrated over the Java Sea.

Indonesia's search and rescue agency said in a press conference that emergency signals detected earlier were not from Flight 8501.

Based on the plane's last known coordinates, the aircraft probably crashed into the water and "is at the bottom of the sea," Indonesia search-and-rescue chief Henry Bambang Soelistyo said. Still, searchers planned to expand their efforts onto land on Tuesday.

The plane, en route to Singapore, disappeared from radar less than an hour into the flight. Officials are looking at many factors that contributed to the disappearance including technical failures and weather.

Djoko Murjatmodjo, said the last communication between the pilot and air traffic control was at 6:13 a.m. when the pilot "asked to avoid clouds by turning left and going higher to 34,000 feet." It was last seen on radar at 6:16 a.m., and a minute later was no longer there, he said.

Meanwhile, the United States has agreed to join in the search for the missing airliner. The the USS Sampson is being sent to aid in the search for wreckage, CBS News has learned. It is expected to arrive during evening hours and miss the beginning of the third day of the search.

Searchers spotted two oily patches and floating objects in separate locations, but no one knew whether any of it was related to the plane that vanished Sunday halfway into what should have been a two-hour hop from Surabaya, Indonesia, to Singapore. Officials saw little reason to believe the flight met anything but a grim fate.

When planning a route prior to takeoff, pilots try to avoid thunderstorms. But if one pops up during the trip, or crews encounter rough turbulence, they routinely ask to fly around storms or move below or above the turbulence.

A storm alone isn't going to bring down a modern plane designed to withstand severe weather. But weather paired with a pilot error or a mechanical failure could be disastrous. It's like a car driving on a highway during a thunderstorm.

Plenty of vehicles get through bad weather safely but one that gets a flat tire or takes a turn too fast might crash. Pilots rely on sophisticated weather-radar systems that include a dashboard display of storms and clouds, as well as reports from other crews, to steer around dangerous weather.

"Typically we don't see large commercial aircrafts being taken down by severe weather...when you talk about smaller aircrafts going into thunderstorms, in-flight break ups are a possibility," former Chairman of the NTSB and is now President and CEO of the National Safety Council Deborah Hersman said Monday on "CBS This Morning."

Jakarta's air force base commander, Rear Marshal Dwi Putranto, said an Australian Orion aircraft had detected "suspicious" objects near an island about 100 miles (160 kilometers) off central Kalimantan. That's about 700 miles from where the plane lost contact, but within Monday's greatly expanded search area.

"However, we cannot be sure whether it is part of the missing AirAsia plane," Putranto said. "We are now moving in that direction."Air Force spokesman Rear Marshal Hadi Tjahnanto told MetroTV that an Indonesian helicopter spotted two oil patches in the Java Sea east of Belitung island, much closer to where the plane lost contact. He said oil samples would be collected and analyzed.

It's the second flight to go missing over Southeast Asian waters this year. This time, many are wondering why there hasn't been evidence that the pilots sent a distress signal.

"So far the information that we've heard from the authorities on the ground, is that they asked for clearance to a higher altitude. There wasn't any distress signal that was sent that's been reported at this point," Hersman said. "But I will tell you for pilots, they have responsibilities and they are aviate, navigate and communicate, and communication in an emergency is really the last thing they're focusing on. They've got to handle that airplane and make sure that that is their first priority."

Ruth Natalia Puspitasari, who would have turned 26 on Monday, was among them. Her father, Suyanto, sat with his wife, who was puffy-eyed and coughing, near the family crisis center at Surabaya's airport.

Suyanto remembers the concern his daughter showed for the families of the Flight 370 tragedy. Puspitasari once told him how sad it must be for the victims' relatives who were left waiting for their loved ones with no certainty.

"I don't want to experience the same thing with what was happened with Malaysia Airlines," he said as his wife wept. "It could be a long suffering."

Few believe this search will be as perplexing as the ongoing one for Flight 370, where what happened onboard remains a total mystery. Authorities suspect the plane was deliberately diverted by someone on board and ultimately lost in a remote area of the Indian Ocean with notoriously deep water. Flight 8501 vanished over a heavily traveled sea that is relatively shallow, with no sign of foul play.

The captain, Iryanto, who like many Indonesians uses a single name, had more than 20,000 flying hours, AirAsia said.

People who knew Iryanto recalled that he was an experienced military pilot, flying F-16 fighters before shifting to commercial aviation. His French co-pilot, Remi Plesel, had been in Indonesia three years and loved to fly, his sister, Renee, told France's RTL radio.

"He told me that things were going well, that he'd had a good Christmas. He was happy. The rains were starting," she said. "The weather was bad."

"Until today, we have never lost a life," AirAsia group CEO Tony Fernandes told reporters. "But I think that any airline CEO who says he can guarantee that his airline is 100 percent safe is not accurate."