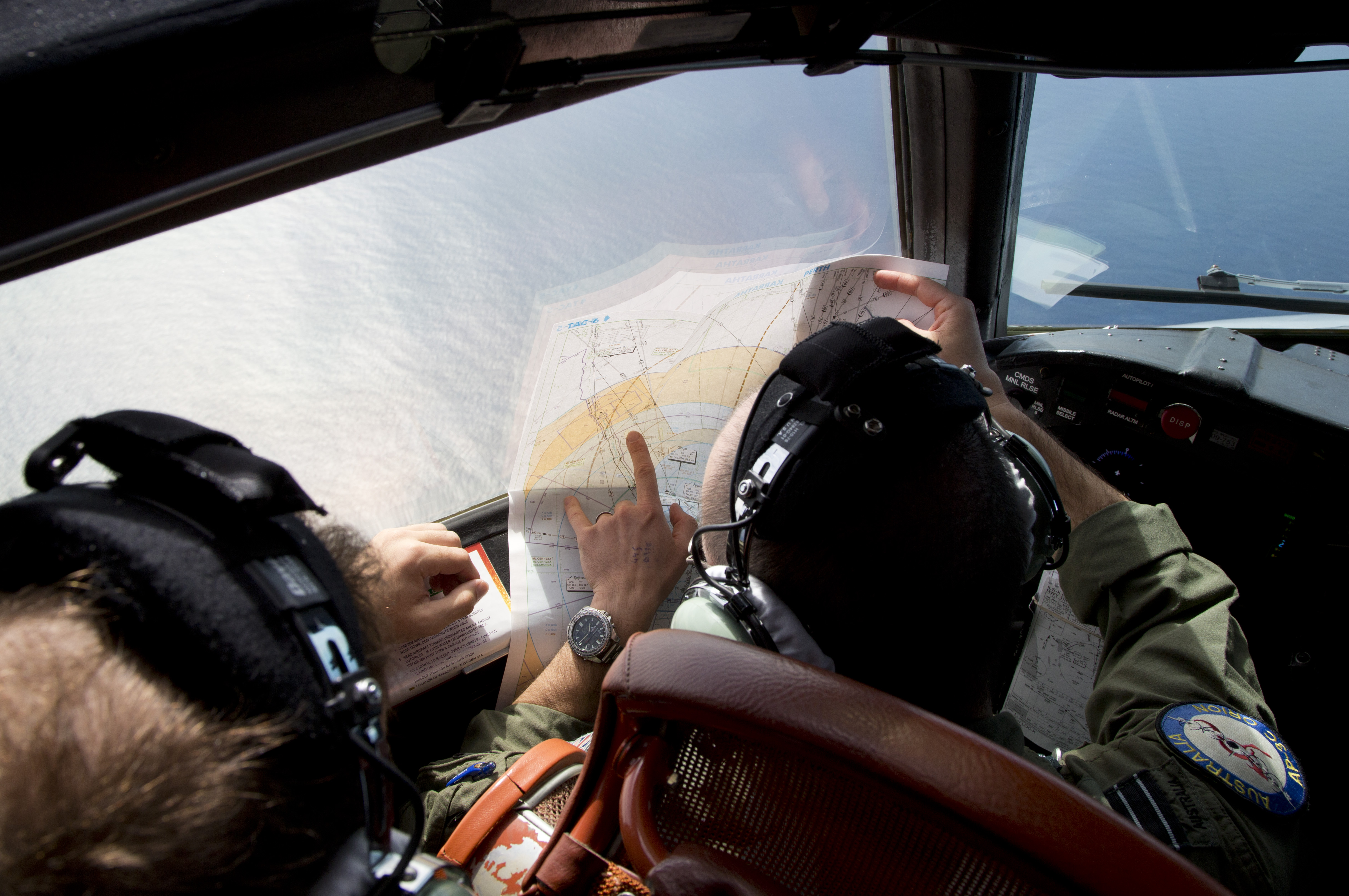 PERTH, Australia - Objects spotted floating in a new search area for debris from the missing Malaysian jetliner need to be recovered and inspected before they can be linked to the plane, Australian officials said Saturday.

Eight planes were ready to comb the newly targeted area off the west coast of Australia after several objects were spotted Friday, including two rectangular items that were blue and gray, and ships on the scene will attempt to recover them, the Australian Maritime Safety Authority said.

"The objects cannot be verified or discounted as being from MH370 until they are relocated and recovered by ships," the authority said in a statement. "It is not known how much flotsam, such as from fishing activities, is ordinarily there. At least one distinctive fishing object has been identified."

Australia's Bureau of Meteorology said a cold front would bring rain, low clouds and reduced visibility over the southern part of the search area, with moderate winds and swells of up to 6 feet. Conditions will improve Sunday, although rain, drizzle and low clouds are still likely.

Newly analyzed satellite data shifted the search zone 680 miles northeast on Friday, raising hopes searchers may be closer to getting physical evidence that Flight 370 crashed in the Indian Ocean on March 8 with 239 people aboard.
The Australian statement said five P-3 Orions - three from Australia and one each from Japan and New Zealand - plus a Japanese coast guard jet, a Chinese Ilyushin IL-76, and one civilian jet acting as a communications relay will take part in the air search Saturday.

The three-week hunt for the jet has been filled with possible sightings, with hundreds of objects identified by satellite and others by plane, but so far not a single piece of debris has been confirmed.

Australian officials said they turned away from the old search area, which they had combed for a week, because a new analysis of radar data suggests the plane had flown faster and therefore ran out of fuel more quickly than previously estimated. The new area is closer to land and has calmer weather than the old one, which will make searching easier.

But Australian Prime Minister Tony Abbott told reporters in Sydney that the job of locating the debris was still difficult.

"We should not underestimate the difficulty of this work - it is an extraordinarily remote location. There are inhospitable seas, it's an inaccessible place, we are trying to find small bits of wreckage in a vast ocean," he said.


"We have moved on" from the old search area, said John Young, manager of AMSA's emergency response division.

The radar data that was re-analyzed was received soon after Flight 370 lost communications and veered from its scheduled path March 8. The Beijing-bound flight carrying 239 people turned around soon after taking off from Kuala Lumpur, flew west toward the Strait of Malacca and disappeared from radar.

The search area has changed several times since the plane vanished as experts analyzed a frustratingly small amount of data from the aircraft, including the radar signals and "pings" that a satellite picked up for several hours after radar and voice contact was lost.

Malaysia's civil aviation chief, Azharuddin Abdul Rahman, told reporters in Kuala Lumpur that personnel at Boeing Co. in Seattle had helped with the analysis of the flight.

"This is our best estimate of the area in which the aircraft is likely to have crashed into the ocean," Martin Dolan, chief commissioner of the Australian Transport Safety Bureau, said at a news conference in Canberra.

He said a wide range of scenarios went into the calculation.

He said that information was coupled with various projections of aircraft performance and the plane's distance from the satellites at given times.

Dolan said the search now was for surface debris to give an indication of "where the main aircraft wreckage is likely to be. This has a long way to go."

A number of the objects spotted Friday were white or light in color, AMSA said, adding that the finds needed to be confirmed by ship.

Young said the hundreds of floating objects detected over the last week by satellites in the former search area, previously considered possible wreckage, "may or may not actually be objects."

When asked about the objects spotted on satellite, one expert told CBS News this week that it was "highly likely that it is trash and not evidence of the plane."

Charles Moore, who's been studying ocean trash for nearly 20 years at the Algalita Marine Research Institute in Long Beach, Calif., points out that there are "thousands of shipping containers lost overboard every year" in that part of the Indian Ocean. The objects could even be from the 2004 tsunami in Indonesia, Moore added.

But in Malaysia, Defense Minister Hishammuddin Hussein said at a news conference that because of ocean drifts, "this new search area could still be consistent with the potential objects identified by various satellite images over the past week."

The new search area is about 80 percent smaller than the old one, but it remains large: about 123,000 square miles, about the size of Poland or New Mexico.

Sea depths in the new area range from 6,560 feet to 13,120 feet, Young said. There are trenches in the area that go even deeper, Australia's national science agency said in a statement. That includes the Diamantina trench, which is up to 24,000 feet deep, but it was unclear whether the deepest parts of the trench are in the search area.

If the wreckage is especially deep, that will complicate search efforts. The U.S. Navy is sending equipment that can hear "black box" pings up to about 20,000 feet deep, and an unmanned underwater vehicle that operates at depths up to 14,800 feet.

Young said a change in search area is not unusual.

"This is the normal business of search and rescue operations - that new information comes to light, refined analyses take you to a different place," Young told reporters. "I don't count the original work as a waste of time."

He said the new search zone, being about 434 miles closer to mainland Australia, will be easier to reach. Planes used so much fuel getting to and from the old search area that had only about two hours of spotting time per sortie.

The new area also has better weather conditions than the old one, where searches were regularly scrapped because of storms, high winds and low visibility.

"The search area has moved out of the 'roaring 40s,' which creates very adverse weather," Young said, referring to the latitude of the previous search area. "I'm not sure that we'll get perfect weather out there, but it's likely to be better than we saw in the past."

Australia's HMAS Success was expected to arrive in the area Saturday, Young said. The Chinese Maritime Safety Administration patrol boat Haixun 01 was also on site, and several more Chinese ships were on their way.

Authorities are rushing to find any piece of the plane to help them locate the black boxes, or flight data and voice recorders, that will help solve the mystery of why the jet flew so far off-course. The battery in a black box normally lasts for at least a month.

Officials are already preparing for the hunt for the black boxes. The U.S. Navy towed pinger locator and Bluefin-21 autonomous underwater vehicle are to be fitted onto an Australian vessel, the Ocean Shield, when it reaches Albany, a port near Perth, in a day or two, said a government official who spoke on condition of anonymity because he was not authorized to speak to the media.

He did not say how long it would take to reach the search area. He said the Chinese ships are also expected to have acoustic sensors that can listen for black box pingers.

The lack of results from the search gave one Malaysian family a little hope that the authorities were wrong in their calculations.

Eliz Wong Yun Yi, 24, whose father was on the plane, said her family stopped watching the daily Malaysian news conference because they felt the government was not upfront with information. All the new satellite data added to the confusion, she said.

"After so many days, still no plane. We will not believe what they say until the plane wreckage is found. I want to stay positive and believe that my father will come back," she said. Her father, Wong Sai Sang, a 53-year-old Malaysian property sales manager, had been on his way to Beijing for work.