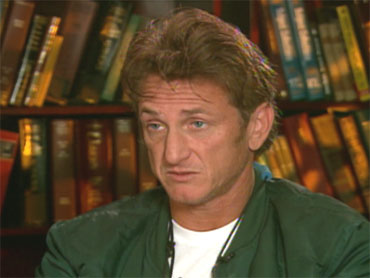 In an appearance in early March on HBO's "Real Time with Bill Maher," the Oscar-winning Penn slammed Chavez critics who refer to the socialist leader as a dictator.

In an open letter from Alonso published on Newbusters.com, the "Predator 2" star demands to know why Penn is supporting "a government that has converted Venezuela into the second most dangerous country in the world" and a man whose stranglehold "upon its people is so oppressive that a big price is paid for exercising freedom of speech: Persecutions, closing of radio and television stations, jail...and even death."

The actress, who was born in Cuba and raised in Venezuela, claims Chavez is turning his country into a mirror image of Cuba. "Agreed, Chavez did win his first elections, but like Hitler, he betrayed what the country gave him: The vote of confidence," she wrote.

Referring to Penn's Jewish father and his current aid work in earthquake-ravaged Haiti, the actress accuses Chavez of anti-semitism and says he "has notoriously increased poverty (65 percent to 71 percent), produced scarcity of staple products and created an energy and water shortage crisis never seen in Venezuela."

In his Maher appearance, Penn insisted Chavez has won repeated elections and suggested that media critics who call him a dictator should be jailed. He said that "there should be a bar for which one goes to prison for these kinds of biases."

Chavez, who has been in power since 1999, immediately welcomed Penn's comments and thanked the actor for standing up to his detractors.