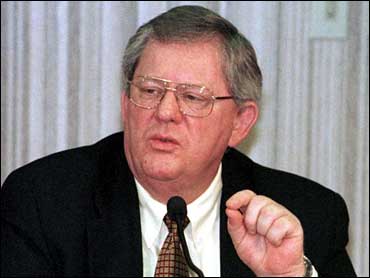 Former Rep. Bill Janklow, who resigned from Congress after being convicted in a highway death, was stopped 16 times by state troopers during his last term as governor but was never ticketed, according to a South Dakota Highway Patrol report.

Troopers felt they should not ticket Janklow out of respect for his authority and, in some cases, fear of retribution, said the report, written by the patrol superintendent, Col. Dan Mosteller, for Gov. Mike Rounds.

Janklow was attorney general from 1975 to 1979, governor from 1979 to 1987 and re-elected governor in 1994. He was elected to Congress in November 2002 but resigned in January after being convicted of second-degree manslaughter, speeding, running a stop sign and reckless driving. He was speeding on a rural road when he ran a stop sign and struck a motorcyclist.

Prosecutors said he had a long habit of speeding.

Janklow told The Associated Press on Wednesday that he never asked for special treatment.

"I have never in my life said to a law enforcement officer or suggested to them that I not get a ticket," he said. "I was going on official business and I had the authority to exceed the speed limit when I had the emergency equipment on my vehicles."

While governor, he had emergency lights installed on vehicles he drove.

Janklow said he had to speed sometimes because he couldn't always fly.

"Almost every incident where I was driving as governor I was going to important things for South Dakota," he said. "I lived in Pierre. Pierre is 100 to 150 miles from anyplace where there's concentrations of people."

But he said officers had the right to cite him.

According to the report, obtained first by the Argus Leader of Sioux Falls:

Four troopers did not ticket the former governor because they "felt they were instructed not to arrest the governor or feared repercussions by doing so."

Five said they did not issue a ticket out of respect for his office.

Five others said they thought the governor had authority to do what he was doing.

Two officers had left the Highway Patrol and no reasons were given for their failure to issue a citation.

A more detailed report on Janklow's driving is part of the court records sealed in connection with Janklow's trial for the deadly crash that occurred last August.

Mosteller told the Argus Leader the report has prompted a new emphasis on making sure troopers know and understand the agency's policy on traffic stops and discretion in deciding whether to issue warnings or tickets.

"I said regardless of who it is or what they are or what they think they are, there'll be no backlash or no criticism from my office, nor will there be any criticism coming from the governor's office," Mosteller said.

A check by The Associated Press last year of computerized court-system records showed Janklow received 12 speeding tickets in 11 South Dakota counties from 1990 to 1994 and paid more than $1,000 in fines for driving as much as 20 mph over the speed limit. The records showed no speeding tickets after Janklow became governor again in November 1994.