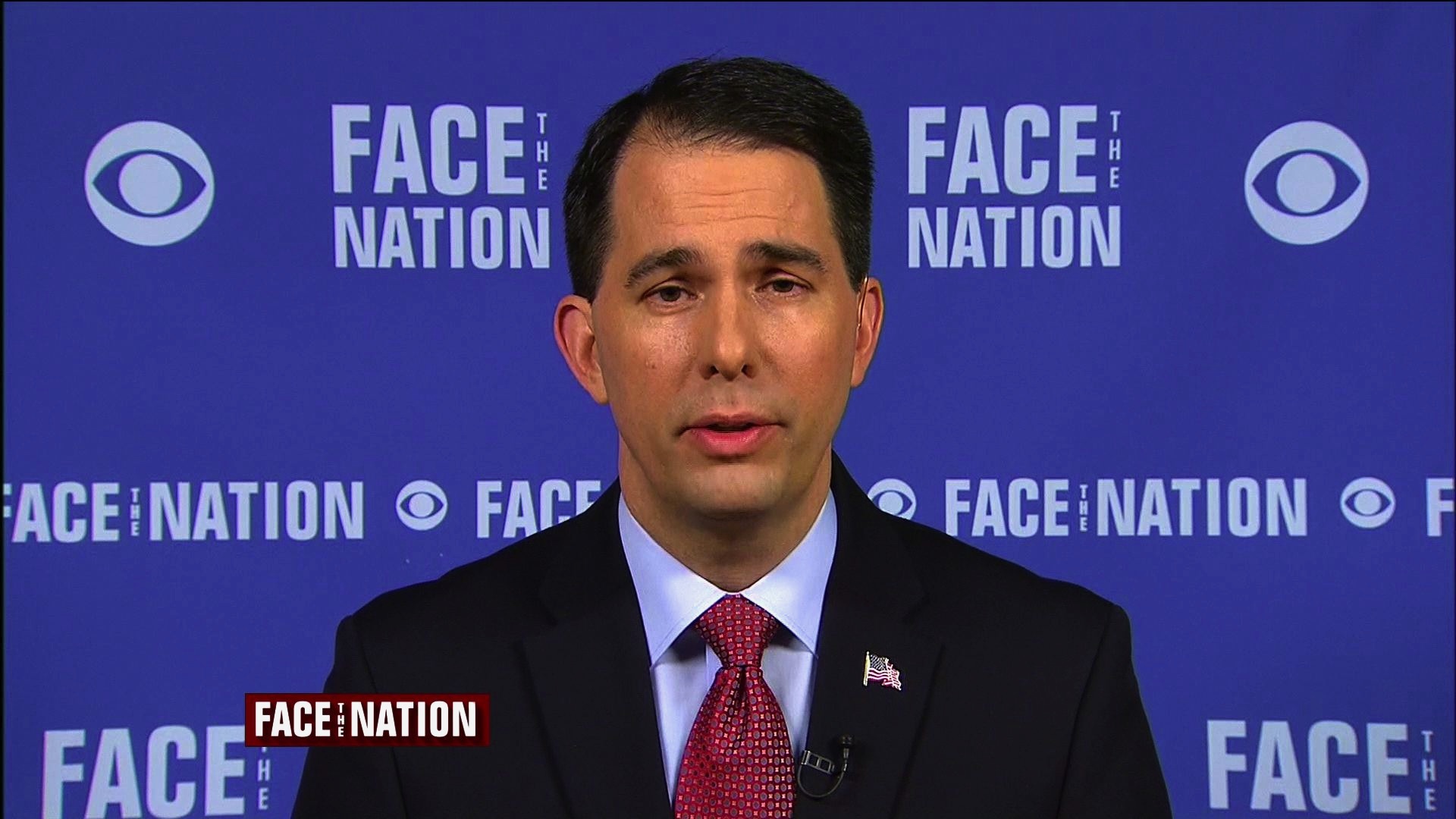 If he runs for president in 2016, Wisconsin Gov. Scott Walker promises that "the contrast would be clear" between his foreign policy and that of former Secretary of State Hillary Clinton.

"If I choose to get in this race, [foreign policy is] something I'm going to lay out a very clear plan for what we should do going forward, and how we should address the issues we face here in America and the issues we face around the world. I think there's a wide open door to lay out a very clear doctrine. And I do think that if foreign policy plays an important role, the contrast would be clear," Walker said on CBS' "Face the Nation" Sunday.

"Just about everywhere that Hillary Clinton has played a role with this president, under President Obama, that part of the world is largely a failure, a mess, because of the policies that we've seen from Obama and Clinton," he added.

In an earlier interview on "Face the Nation," former Defense Secretary Robert Gates said he hadn't "been particularly impressed" by 2016 candidates on either side of the aisle, and noted in particular a major lack of foreign policy experience on the GOP side.

Asked about his foreign policy credentials, Walker said, "I think as a governor, it's really ultimately about leadership."

As an example of what he could do as a governor, Walker pointed to the fact that he already had experience assembling a cabinet and going on trade missions abroad. And he said "having the good sense to listen" to the people he would put in place as president is important, and something that "successful governors in either party have to do...every single day."

As for whether he is actually running for president, Walker promised to announce his intentions at the end of June after Wisconsin's state budget is finalized.

He also weighed in on the lessons of the Iraq War, following former Florida Gov. Jeb Bush's struggle to answer a question last week about whether he would have authorized the 2003 invasion given what is known today.

"I think any president, regardless of party, probably would've made a similar decision to what President Bush did at the time, with the information he had available. Remember, even Secretary of State, then-Senator Clinton, voted for a measure supporting the Iraq War. I think it was a failure in many cases in the intelligence that was given to the president, to the Congress at the time. Knowing what we know now, I think it's safe for many of us, myself included, to say, we probably wouldn't have taken that tact," he said.

But he also said that President Obama "made a mistake by urging the country to pull back from our state in Iraq."

"We have a very destabilized region, and we need to have a strong presence there," he said.

Walker, like many of the GOP governors contemplating a bid for president, is already facing questions about his lack of foreign policy experience. Some of his answers have raised eyebrows, including his recent claim that the most significant policy decision of his lifetime was former President Ronald Reagan's actions to break up a 1981 strike by air traffic controllers.

But when "Face the Nation" host Bob Schieffer asked about a few other significant moves of Walker's lifetime, including former President Nixon's visit to China or the decision to go after Osama bin Laden, Walker doubled down on his choice.

"I think those were all important things. Don't get me wrong in that regard," Walker said. But he noted that former Secretary of State George Schultz has also called it the most significant action of Reagan's administration.

"I had just turned 13 two days before his election in 1980, and for me, looking at that kind of leadership, he set the tone not just domestically with that action, he sent the message around the world as you just read off, I think not only to our allies, that this was someone that was serious, that could be trusted. But in combination with our adversaries, they sent a clear message not to mess with him," he said.

Walker also reiterated why he thinks Mr. Obama should walk away from nuclear talks with Iran. "If we're going to have negotiations, we should have them on our terms, not on theirs," Walker said, arguing that the U.S. should demand a total dismantling of Iran's illicit nuclear infrastructure, that Iran provide full disclosure, transparency and access for inspections, and require that they stop trying to influence other countries in the region.