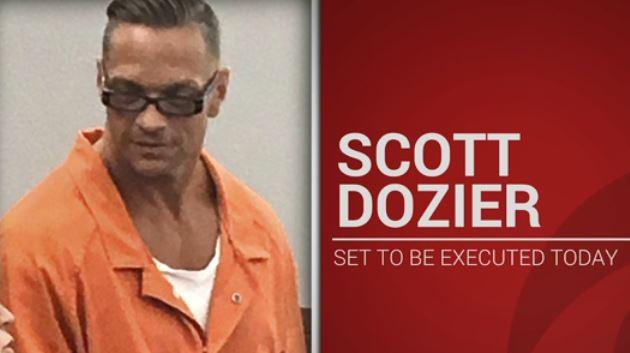 LAS VEGAS -- A twice-convicted killer scheduled to be executed Wednesday night in Nevada by an untried three-drug lethal injection is steadfast in his desire to be put to death, but a final-hour lawsuit by a drug company could halt the execution. Pharmaceutical companies have resisted the use of their drugs in executions for 10 years, citing both legal and ethical concerns. However, the legal challenge filed Tuesday in Nevada by New Jersey-based Alvogen is only the second in the U.S., said Robert Dunham, executive director of the Death Penalty Information Center in Washington, D.C.

The previous challenge filed last year by a different company in Arkansas was unsuccessful in halting that execution.

A Nevada jury decided Dozier should die for murder convictions in Arizona and Nevada in separate slayings of drug-trade associates, according to court records. Dozier, who attempted suicide in the past, has said he prefers death to life behind bars.

"I've been very clear about my desire to be executed ... even if suffering is inevitable," Dozier said in a handwritten note to a judge who postponed his execution in November over concerns the untried drug regimen could leave him suffocating, conscious and unable to move.

Alvogen says it doesn't want its product used in "botched" executions. It said in court documents that Nevada prison officials illegally obtained the sedative midazolam and demanded that it be returned and not used in Dozier's execution.

"Midazolam is not approved for use in such an application," the document said, adding uses of midazolam in other states "have been extremely controversial and have led to widespread concern that prisoners have been exposed to cruel and unusual treatment."

In 2015, the U.S. Supreme Court ruled that the drug can be used in lethal injections. Midazolam has been used with inconsistent results in states including Alabama, Arkansas, Arizona, Florida and Ohio. Dunham noted the 2014 executions of Dennis McGuire in Ohio and Joseph Rudolph Wood III in Arizona left both inmates gasping and snorting before they died.

Midazolam was substituted in May for expired Nevada prison stocks of diazepam, a similar sedative commonly known as Valium. Nevada's first-of-its-kind execution protocol also calls for the powerful synthetic opioid fentanyl to slow Dozier's breathing and the muscle paralytic cisatracurium to prevent movement and stop his breathing.

Alvogen claims it learned of the plan to use midazolam in Dozier's execution on Saturday after receiving inquiries from the press, reports the Reno Gazette-Journal.

According to the complaint, obtained by the paper, the company claims it sent letter to governors, attorney generals and the directors of each department of corrections in every death penalty state in late April warning them against using its products in executions, including midazolam. Alvogen reportedly requested that states who purchased the drug and planned to use it in any future executions should return it to the company for a refund.

Alvogen alleged that Nevada, under the direction of the chief medical officer, purchased the drug from its wholesale distributor without disclosing the contents of the letter. Alvogen reportedly claims the state damaged the company's reputation and goodwill.

"While Alvogen takes no position on the death penalty itself, Alvogen's products were developed to save and improve patients' lives and their use in executions is fundamentally contrary to this purpose," the complaint said.

Nevada refused Pfizer's demand last year to return the company's diazepam and fentanyl, which is at the center of America's opioid crisis and has been blamed for overdoses nationwide but has not been used in an execution.

In the legal challenge in Arkansas last year, McKesson Corp. said it wanted nothing to do with executions and accused the state of obtaining vecuronium bromide, a drug used to stop inmates' lungs, under false pretenses.

In a 2017 statement, McKesson alleged the Arkansas Department of Corrections "intentionally sought to circumvent McKesson's policies to procure Pfizer's vecuronium bromide under the auspices that it would be used for medical purposes in ADC's health facility."

The Arkansas Supreme Court ruled against the company and allowed that execution to go forward, but legal questions about whether pharmaceutical companies can block use of their drugs in the death penalty haven't been resolved, Dunham said.

Dozier repeated his desire to die during recent interviews with the Reno Gazette Journal and Las Vegas Review-Journal.

"Life in prison isn't a life," the 47-year-old told the Review-Journal. He has not responded to messages through his lawyers to speak with The Associated Press.

Dozier, son of a federal water engineer, grew up in Boulder City, Nevada, and attended high school in Phoenix. He is an honorably discharged Army veteran; a divorced father who became an emergency medical technician during his then-wife's high-risk pregnancy; a pastels painter; a landscaper; and a methamphetamine user, maker and dealer.

He was close to his grandfather, who killed himself when Dozier was 5. He told a clinical psychologist who testified at his trial that he was sexually abused by a teenage male neighbor from ages 5 to 7.

There's a limit to how much artwork and exercise a person can do in prison, Dozier said in court hearings and letters to Clark County District Judge Jennifer Togliatti, who postponed his execution last year.

In 2005, Dozier was sentenced to 22 years in prison for shooting 26-year-old Jasen Greene, whose body was found in 2002 in a shallow grave outside Phoenix. A witness testified that Dozier used a sledgehammer to break Greene's limbs so the corpse would fit in a plastic tote that Dozier used to transport meth, equipment and chemicals.

Dozier was sentenced to die for robbing, killing and dismembering 22-year-old Jeremiah Miller at a Las Vegas motel in 2002. Miller had come to Nevada to buy ingredients to make meth. His decapitated torso was found in a suitcase in an apartment building trash bin, also missing lower legs and hands. He was identified by tattoos on the shoulders. His head was never found.

Dozier suspended any appeals of his conviction and sentence, which would make him one of about 10 percent of the 1,477 inmates who gave up appeals and were executed nationwide since 1977, according to the Death Penalty Information Center.

He did, however, let federal public defenders challenge the execution protocol drawn up last year by state medical and prison officials. They argued the untried three-drug combination would be less humane than putting down a pet.

The judge invited state Supreme Court review, saying she expected the Nevada execution to be closely watched by officials in states that have struggled in recent years to identify and obtain drugs from pharmaceutical companies that don't want their products used for the death penalty.

The state high court in May decided on procedural grounds that the execution could go forward but did not review the three-drug protocol that death penalty experts have characterized as experimental and risky.

"Because Nevada is using a combination of drugs that no one has used before, there is a lot about its protocol that we don't know anything about," Dunham said.

The midazolam is expected to render Dozier unconscious before he is injected with the fentanyl. That will be followed by the muscle paralyzing drug.

Last week, the American Civil Liberties Union of Nevada sued the state to obtain the drug regimen and plans for the lethal injection, reports the Reno Gazette-Journal. Amy Rose, ACLU of Nevada legal director, told the paper she was concerned that the state is moving forward with the execution under the "veil of secrecy and with the use of such risky drugs."

"It's about accountability," Rose told the paper. "It's about transparency. It's about making sure that the state, when they decide they want to take a life, that they do it in a constitutional and legal manner."

Nevada's last execution occurred in 2006, when Daryl Linnie Mack asked to be put to death for his conviction in a 1988 rape and murder in Reno.