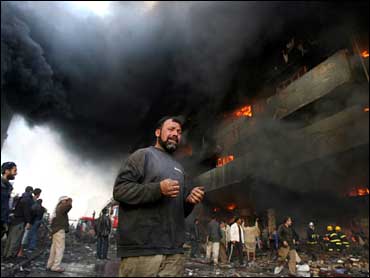 Thunderous car bombs shattered a crowded marketplace in the heart of Baghdad on Monday, triggering secondary explosions, engulfing an eight-story building in flames and killing at least 78 people in the latest in a series of brutal bombings aimed at the country's Shiite majority.

Even by Baghdad's standards, the multiple car bombing in the city's biggest market was catastrophic, reports CBS News chief foreign correspondent Lara Logan from Baghdad. The market was the capital's oldest and most popular.

For the many wounded who flooded the city's overcrowded hospitals, the horror isn't over yet, adds Logan. The shortage of medical staff, medicines and equipment means more will die.

Police in Iraq say a total of 139 people were killed today in violence nationwide, most of them in the Baghdad blasts.

The huge blasts appeared timed to coincide with the first anniversary — on the Muslim lunar calendar — of the bombing of a Shiite shrine that unleashed the torrent of sectarian bloodletting that has gripped the capital for months.

The triple car bombing wrecked the Shorja market — Baghdad's oldest — the day after joint U.S. and Iraqi forces had temporarily sealed an adjacent neighborhood as part of the latest drive to clamp off violence. The operation was part of the latest Baghdad security push to which President George W. Bush has committed an additional 21,500 American troops.

The U.S. military would not say if it had increased security patrols against potential violence on the anniversary of the Samarra shrine bombing.

A 15-minute period of commemoration in the capital marking the attack on the al-Askariya shrine had just ended when the three parked cars exploded, obliterating shops and stalls selling clothing and accessories in one of the targeted buildings.

The sound of two of the blasts was caught on tape as Prime Minister Nouri al-Maliki was delivering a speech live on television from the Cabinet building in the heavily fortified Green Zone at the end of the bombing commemoration. Television had shown the prime minister and his Cabinet standing in silence for the quarter hour beginning at noon.

The Shiite prime minister didn't flinch as he called for unity and voiced optimism about the U.S.-Iraqi security sweep that officials said will gain momentum this week.

"We have great faith in our security services, army and police who have proved that they are a real protective force for this country, and we have faith that Iraqis have realized that there will be no future for this country unless terrorism is curbed," he said.

The car bombs exploded within seconds of each other, targeting two buildings about 200 yards apart. One of the cars was parked near the entrance to a parking garage under one of the buildings.

Debris and mannequins were scattered in pools of blood on the floor of a warehouse-like structure. Two men could be seen carrying the limp body of one of the dead. Small fires burned long after the blasts in the rubble-strewn street.

Dense smoke blackened the area and rose hundreds of yards from the market district on the east bank of the Tigris River. Fires raged, fueled by merchandise in the market.

About 30 minutes before the three car bombs tore through the market, a suicide bomber detonated an explosives vest in a crowd near a popular falafel restaurant in the Bab al-Sharqi area, not far from Shorja. Nine people were killed and 19 wounded.

Ambulances and pickup trucks rushed many of the nearly 166 wounded in the Shorja blast to nearby al-Kindi hospital in the largely Shiite neighborhood, which has been hit by a series of deadly bombings this year.

Sahib Abbas, 50, who owns a menswear shop in one of the targeted buildings watched the recovery efforts in a daze and barefoot, his face covered with soot.

"Hundred of thousands of dollars were lost in this bombing," he said.

Many shopkeepers were caught in the second blast as they ran into the street to see what had happened after the first car bombing.

"I cannot go back to my shop now," Abbas said. "Who is going to compensate us for our losses? All the money we gathered all our lives is gone in a moment. I cannot talk any more. The source of my children's living is lost."

Others screamed, "Where is the government? Where is the security plan? We have had enough? We have lost our money and goods and our source of living."

Elsewhere in Baghdad, some roads and bridges were closed after al-Maliki called for government offices to set aside time to remember the Samarra bombing. The statement announcing the ceremony urged all citizens to "chant `God is great' in all the mosques, and to ring bells in all the churches."

"The explosion of the holy shrine pushed the country into blind violence, in which tens of thousands of innocents were killed. No one knows but Allah when this tragedy will be over," Grand Ayatollah Ali al-Sistani, Iraq's top Shiite cleric, said in a statement issued Monday before the bombings.

Al-Sistani urged the Iraqi government to rebuild the shrine, whose golden dome was partially torn off by last year's blast. The compound has since been locked and guarded by Iraqi police. But he also called for restraint among those observing Monday's anniversary.

Hundreds of men chanted and beat their chests and drums as they carried a replica of the Samarra mosque before speeches by Iraqi President Jalal Talabani, a Kurd, and Abdul-Aziz al-Hakim, Iraq's most powerful Shiite politician, who also demanded the reconstruction of the al-Askariya shrine, site of the graves of two Shiite saints.

"The fact that the two shrines have been left for a year in this tragic condition is evidence of our predicament in Iraq," al-Hakim said.

About 16,000 demonstrators flooded the main street of the southern city of Karbala, 50 miles south of Baghdad, marching toward two Shiite shrines in that holy city. Hundreds of police stood guard. Participants rallied with placards reading, "No to terrorism" and "Iraqis are one people, whether Shiite or Sunni."

In 2006 alone, the United Nations reported that 34,452 civilians were killed in violence that has left central Iraq — Baghdad in particular — battered and divided along sectarian lines.

In the Shiite holy city of Najaf, Iraqi Vice President Adil Abdul-Mahdi accused al Qaeda of using the Samarra bombing to "stir sectarianism" and urged Iraqis to rebuild their country.

"We should not stand thwarted. All Iraqis — Arabs, Kurds, Turkomen and others — have to move forward to rebuild the new Iraq after it was ruined for decades," he said.

"There is nothing in front of us except to share society together.