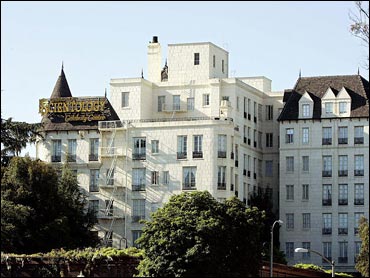 The leader of the Church of Scientology struck his subordinates numerous times and set an example for physical violence among the tightly controlled religion's management team, four former high-ranking executives told a newspaper for a story published Sunday.

The executives who have since left the organization told The St. Petersburg Times that they witnessed David Miscavige, chairman of the board that oversees the church, hit staff members dozens of times.

"It was random and whimsical. It could be the look on your face. Or not answering a question quickly. But it always was a punishment," said Mike Rinder, who oversaw the church's legal and media relations operations. Rinder said he was struck many times by Miscavige and that he also hit others before leaving in 2007.

In a response to the paper, the church denied the allegations, saying that the four former executives statements were "absolute and total lies," and the claims are an effort to tarnish Miscavige, who has led the church for more than two decades. A spokesman said Sunday the church provided documentation that the claims the four made were false.

Marty Rathbun, who served on the church's board and was a top lieutenant of Miscavige's, said he was often ordered by Miscavige to attack others.

Tom De Vocht, who for years oversaw the church's spiritual headquarters in Clearwater, estimated that during one three-year period, he saw Miscavige strike staffers as many as 100 times. He left in 2005.

De Vocht also participated, explaining to the newspaper how he rationalized his actions: "If I don't attack I'm going to be attacked. It's a survival instinct in a weird situation that no one should be in."

Amy Scobee, a manager in California who helped build the church's network of Celebrity Centres, said she witnessed numerous attacks before leaving in 2005 but was never hit herself or saw any other women attacked.

The former executives all expressed dismay at the violence, but the newspaper's story didn't detail the circumstances surrounding each one's departure.

Monique Yingling, a church spokeswoman, said they left because they had been removed from their posts and couldn't handle the demotions.

Church spokesman Tommy Davis told the newspaper that an internal investigation revealed that Rathbun - and not Miscavige - was responsible for dozens of attacks in the years before he left in 2004.

Davis told The Associated Press that the allegations about Miscavige were "absolutely, unquestionably false" and "sickening and outrageous." He said Miscavige is leading the church through unprecedented growth and is focusing on his parishioners, not the accusations.

The newspaper reported it met with church spokesmen and lawyers for 25 hours and that it began requesting to interview Miscavige on May 13 but was told his schedule would not permit it before a date in July.

"I am at a loss to comprehend how the St. Petersburg Times can publish a story about me and the religion I lead without accepting the offer to speak with me," Miscavige said in a letter to the newspaper e-mailed on Saturday.

Davis said Miscavige was busy with a massive project for a weeklong series that will be broadcast to Scientology churches all around the world.

Sunday's report was the first of a three-part series on the church.

The Los Angeles-based Church of Scientology, founded in 1954 by the late science fiction writer L. Ron Hubbard, teaches that technology can expand the mind and help solve problems. It claims 10 million members around the world, including celebrity devotees Tom Cruise and John Travolta.

Devotees converge on Clearwater, on Florida' west coast, for the highest levels of the church's training programs. By church tallies, around 12,000 Scientologists live and work in and around Clearwater.

Scientologists believe spiritual enlightenment is possible by ridding the mind and soul of the accumulated, unwanted effects of this lifetime and innumerable previous lifetimes through an intense counseling process called "auditing." Auditors use a device called an "e-meter," similar to a polygraph.

Parishioners pay hundreds and even thousands of dollars for the auditing services and progress through various levels of "Operating Thetan." Those seeking to achieve the highest "OT" levels visit Clearwater.