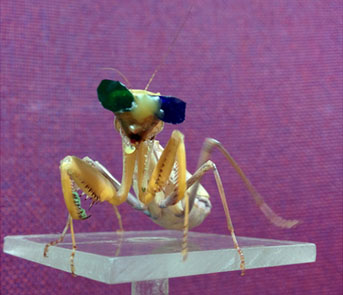 These might be the most stylish bugs around. Scientists made praying mantises wear tiny 3D glasses to test if the insects have strereopsis, or 3D vision. While these insects won't be watching the new "Star Wars" film in IMAX 3D anytime soon, proving that they do have 3D vision is significant because up until now, 3D vision had only been confirmed in vertebrates.

The research team from Newcastle University in the United Kingdom published their findings in the journal Scientific Results.

Back in 1980s, scientists previously used less sophisticated means to test for stereopsis in a praying mantis. They placed prisms of differing powers before the eyes of the insect, which caused the mantis to just miss out on striking an object set in front of it. This suggested that these creatures see the world similar to the way humans do, but was not necessarily a direct test for 3D vision.

This time around, the research team succeeded by giving the mantises "anaglyph" glasses -- similar to those old-fashioned red and blue lenses for 3D films or that sometimes come with boxes of cereal. Well, apparently the praying mantis can't see red light clearly, which made the researchers switch to blue and green lenses, instead. This gave the mantises the "illusion of 3D depth," according to the paper.

The was tested by providing the insects images on a bright background that resembled the shape of the animal's prey. Three-dimensional versions of the images caused the mantises to strike out at them, because it seemed like the shapes were moving toward them. Two-dimensional images did not produce this response.

"We have used our insect 3D cinema to provide clear and dramatic proof of stereopsis in insects. This technique opens up broad new avenues of research," the scientists wrote.

The end goal is to better understand human depth perception and the ways eyes process three-dimensional images. It also provided these insects with some pretty retro shades.