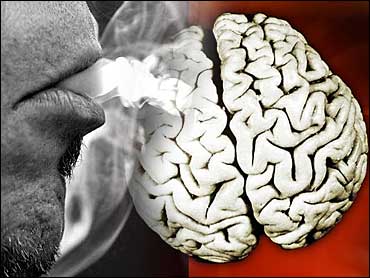 Damage to a coin-sized spot deep in the brain seems to wipe out the urge to smoke, a surprising discovery that may shed important new light on addiction.

The research was inspired by a stroke survivor who claimed he simply forgot his two-pack-a-day addiction — no cravings, no nicotine patches, not even a conscious desire to quit.

"The quitting is like a light switch that went off," said Dr. Antoine Bechara of the University of Southern California, who scanned the brains of 69 smokers and ex-smokers to pinpoint the region involved. "This is very striking."

The finding, reported in Friday's edition of the journal Science, points scientists toward new ways to develop anti-smoking aids by targeting this little-known brain region called the insula. And it sparked excitement among addiction specialists who expect the insula to play a key role in other addictions, too.

"What this study shows unequivocally is the insula is a key structure in the brain for perceiving the urges to take the drug," urges that are "the backbone of the addiction," Volkow added.

Why? The insula appears to be where the brain turns physical reactions into feelings, such as feeling anxious when your heart speeds up. When those reactions are caused by a particular substance, the insula may act like sort of a headquarters for cravings.

Some 44 million Americans smoke, and the government says more than 400,000 a year die of smoking-related illnesses. Declines in smoking have slowed in recent years, making it unlikely that the nation will reach a public health goal of reducing the rate to 12 percent by 2010.

Nicotine is one of the most addictive substances known, and it is common for smokers to suffer repeated relapses when they try to quit.

So imagine Bechara's surprise at hearing a patient he code-named "Nathan" note nonchalantly that "my body forgot the urge to smoke" right after his stroke.

At the time, Bechara was at the University of Iowa studying the effects of certain types of brain damage after strokes or other injury. While Nathan was hospitalized, stroke specialists sent his information to that brain registry. He was 38, had smoked since 14, said he enjoyed it and had had no intention to quit. But his last puff was the night before his stroke. His surprised wife said he never even asked for a smoke while in the hospital.

It is not unusual for a health scare to prompt an attempt at quitting. "That's the quitting that's not as interesting," Bechara said.

Instead, Nathan experienced what Bechara calls a "disruption of smoking addiction," and he wanted to know why.

Bechara and colleagues culled their brain-damage registry for 69 patients who had smoked regularly before their injuries. Nineteen, including Nathan, had damage to the insula. Thirteen of the insula-damaged patients had quit smoking, with 12 of them quitting within a day of the brain injury and neither smoking nor even feeling the urge since then.

Of the remaining 50 patients with damage in other brain regions, 19 quit smoking but only four met the broken-addiction criteria.

If Bechara's findings are validated, they suggest that developing drugs that target the insula might help smokers quit. There are nicotine receptors in the insula, meaning it should be possible to create a nicotine-specific drug, Bechara said — albeit years from now.

More immediately, NIDA's Volkow wants to try a different experiment: Scientists can temporarily alter function of certain brain regions with pulses of magnetic energy, called "transcranial magnetic stimulation." She wants to see if it is possible to focus such magnetic pulses on the insula, and thus verify its role.

Other neurologic functions are known to be involved with addiction, too, such as the brain's "reward" or pleasure pathways. The insula discovery does not contradict that work, but adds another layer to how addiction grips the brain, Bechara said.