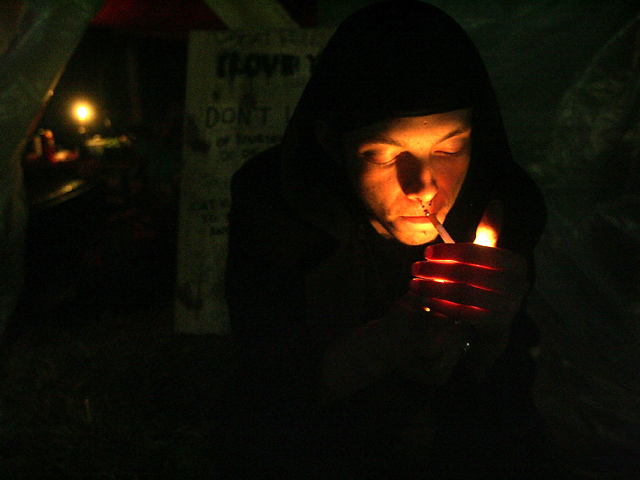 They do it for coal-burning power plants. So how about something for what many consider to be a walking smokestack -- the cigarette smoker?

Yes, a license to smoke. Simon Chapman, a professor of public health at the University of Sydney in Australia, offers this radical proposal to help reduce the damaging health effects of tobacco, both for the user and the recipient of second-hand smoke.

In Martine Rothblatt's new book "Virtually Human," she is challenging the limits of human life

What's killing the honey bees? Mystery may be solved

You may think this is brilliant -- or crazy -- or both. Chapman's proposal appeared Tuesday in the online journal PLoS Medicine, accompanied by an opposing view put forth by Jeff Collin, a professor of global health policy from the University of Edinburgh in Scotland.

Both Chapman and Collin agree on the basics: Prolonged use of tobacco causes the death of about half its users; no other human activity, including war, is responsible for more deaths annually; and cigarettes may cause more than a billion premature deaths by the end of this century if things don't change, according to World Health Organization estimates.

What the researchers disagree on, however, is how to change things. Chapman calls for an extreme approach.

Argument for a license

The gist of Chapman's proposal is for governments to issue a smartcard to tobacco users to limit access to tobacco products and also to encourage them to quit. He suggests a limit of 50 cigarettes per day averaged over two weeks, enough to accommodate heavy smokers. [Infographic: Who Still Smokes?]

There would be a fee for the license, based on usage, that "would neither be trivial nor astronomical ... [but] set at a sufficient level to give smokers some pause in deciding whether to obtain or renew their license," Chapman wrote.

We have this system already, Chapman said, in the form of drug prescriptions that act as a "temporary license" for substances that can be dangerous if used improperly.

As for the smartcard, this would not be onerous to obtain, but indeed would be mandatory for all tobacco purchases. Abusers of the system -- both retailers and consumers -- would face sharp fines. Japan has such a system in place for purchasing cigarettes from vending machines.

Wait, wait: Before you brush this off with the assumption that it would create a black market economy or that it smacks of Big Brother, Chapman fields these and most other arguments in his proposal, available for free viewing at PLOS Medicine.

For example, if obtaining a license is not difficult, a smoker has little incentive to purchase cigarettes from a criminal, and black-market sellers have no profit motive, Chapman told LiveScience. [Never Too Late: 5 Bad Habits You Should Still Quit]

"Opponents of the idea would be quick to suggest that Orwellian social engineers would soon be calling for licenses to drink alcohol and to eat junk food or engage in any 'risky' activity," Chapman added. "This argument rests on poor public understanding of the magnitude of the risks of smoking relative to other cumulative everyday risks to health."

That said, Collin, a public health expert in his own right, respectfully disagrees with Chapman. He thinks that issuing smoking licenses is implausible in most countries, except maybe in Singapore or places with advanced infrastructure and relatively strict social policy rules already in place.

Collin said that a smoking license would increase stigmatization of smokers and also shift focus away from the tobacco industry, which he claims is the real culprit in the global smoking epidemic.

"A fundamental challenge confronting any endgame strategy is that the move towards a tobacco-free society should address the social determinants of health and promote equity and social justice," Collin wrote. "The proposal for a smoker's license should be rejected as failing this challenge."

Regardless of the method, several countries -- Singapore and New Zealand, for example -- have stated goals of having smoke-free populations within a generation or two, Chapman said. Other developed nations have set a goal of lowering the smoking prevalence to under 10 percent of the population, down from a current level of around 20 to 30 percent.

These countries have implemented advertising bans, widespread smoke-free policies, large graphic warnings, and, most recently, plain packaging. As with Chapman's proposal for a tobacco license, however, these current controls would have seemed unimaginable a few generations ago.

Christopher Wanjek is the author of a new novel, "Hey, Einstein!", a comical nature-versus-nurture tale about raising clones of Albert Einstein in less-than-ideal settings. His column, Bad Medicine, appears regularly on LiveScience.