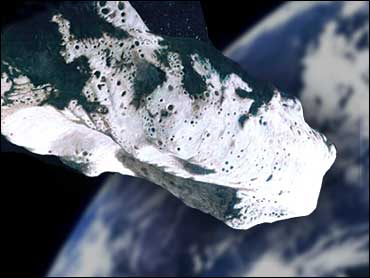 A Maine scientist who uses radar to peer at objects in space says an asteroid that passed by Earth five years ago is due for a return visit to the planetary neighborhood in 2036.

But Chris Magri, an associate professor of physics at the University of Maine at Farmington, says there's no need for panic. By that time, Magri says, scientists may have figured out a way to send the muffin-shaped asteroid, known as KW4, somewhere else.

Magri joined a team of more than a dozen other scientists who calculated that the asteroid will not actually hit the Earth for at least 1,000 years.

The research on KW4 was led by Steven Ostro, an astronomer at the Jet Propulsion Laboratory of the National Aeronautics and Space Administration, and Daniel Scheeres, associate professor of aerospace engineering at the University of Michigan.

Magri, Ostro and Scheeres are among the few scientists around the world who use radar to research the 800 known asteroids that are considered a potential threat because they come close to Earth.

Their research on KW4 was cover story for last week's Science magazine, published by the American Association for the Advancement of Science.

So far the scientists have studied about two dozen of the asteroids, but the examination of KW4 is the most complete to date. Discovered in 1999, it came within 2.9 million miles of Earth in May 2001, close enough to allow Magri and others on the team to study it.

"We know more about KW4 than any of the (other) potentially hazardous asteroids," said Ostro, who has worked with Magri for the past decade on asteroid research.

Magri ran highly complicated software that translated information from the radar into a three-dimensional representation of what KW4 looks like in motion.

KW4 is made up of a roughly one-mile-wide piece, called Alpha; and a smaller, roughly one-third-mile piece, named Beta, which revolves around Alpha as the moon orbits Earth.

Plotting the future path of an asteroid is not a simple matter. The technique draws on a half-dozen scientific disciplines, such as electrical engineering, radio science, geology and astronomy.

"It involves both very difficult observations and some very exotic theoretical work, so that there are not too many of us working in this area," said Ostro.

Magri said radar telescopes measure the asteroid's speed in the way radar guns help police catch speeders. It helps scientists gauge the orbit and the asteroid's future path, just as it's possible to accurately predict the future path of a pool ball for about five or six bounces.

But scientists can make predictions only for a period up to about 1,000 years. Beyond that, unpredictable factors such as the gravitational pull from planets make predictions much less accurate, Magri said.