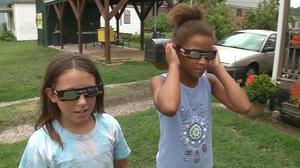 FREEPORT, N.Y. -- Schools and camps around the country are preparing for the solar eclipse that is now just days away.

While it's an exciting time for adults and children alike, experts are reminding parents to make sure kids view the eclipse in a safe way.

As exciting as it is, the director of Twin Oaks Day Camp on New York's Long Island knows the eclipse poses a possible danger for her campers' eyes. She is taking precautions to keep everyone safe.

"We explained to them what an eclipse is, what it looks like and how to protect themselves," camp director Jenni Davis told CBS News' Kenneth Craig.

That means having the proper eyewear and keeping it on, according to Dr. Russell Van Gelder from the University of Washington. Regular sunglasses won't offer enough protection.

"The sun's rays are strong enough to potentially cause permanent damage to the retina if people stare directly at the sun — for children in particular, because they may not understand or be able to fully appreciate those risks," Gelder said. "So it's critical children be supervised."

Camp leaders here have purchased certified eclipse glasses for every camper and counselor.

Experts say it's important to do a practice run putting on the glasses so kids know what to expect. Certified eclipse glasses block out almost all light -- good reason to practice wearing the glasses with kids before the big event.

At Twin Oaks, younger campers will stay inside while the older children, glasses on, will get to see the eclipse in small, supervised groups.

Eight-year-old Aiden Miller is counting down the days.

In communities where schools are back in session, the solar eclipse has become a real-life science lesson and also a bit of a challenge for school administrators. CBS Miami reports some local schools in South Florida are giving kids an excused absence or even the day off to enjoy the eclipse, while others have decided to keep students inside for their safety.

The Scottsdale Unified School District in Arizona decided it was just too dangerous to let kids view the eclipse, especially after some reports of fake eclipse glasses on the market that might put eyes at risk, CBS Phoenix affiliate KPHO reports.

"So without us being able to control the equipment that's being used, if it's donated or something, and also when you're talking about a large amount of children it's also very difficult to convince all of the kids to not look up. That's not to say our kids won't be very well behaved but if there's even a question that there could be something unsafe, Scottsdale's not going to take the chance," said Erin Helm with Scottsdale Unified.

But some parents in the community say they plan to keep their kids home that day so they can watch the real thing.

"I think it's unfair," Arizona mom Nicole Murphy told KPHO. "Especially with them, you know, being in science class and learning about stuff like that you'd think that they would let them view it."