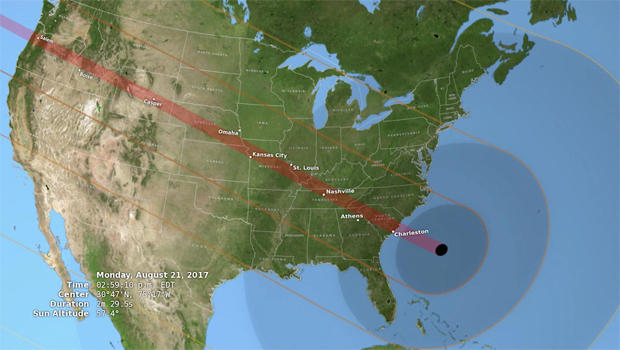 Expect plenty of cries of LOOK UP! a week from tomorrow. "Umbraphilia" is sweeping the nation -- and our Martha Teichner is hardly immune:

Forty-five million pairs of customized eclipse glasses -- that's what American Paper Optics figures its factory outside Memphis has turned out.

"Right now we're producing over 500,000 eclipse glasses a day," said CEO John Jerit. "We think of it as the Super Bowl of the sky. It's so big because we're talking about 300 million people looking at the sky, and they all need eye protection."

Ready or not, here it comes: Eight days from today, for the first time in 99 years, a solar eclipse will cross the entire continental United States, its path of totality, from Oregon to South Carolina, approximately 70 miles wide. A partial eclipse will be visible elsewhere.

What is a solar eclipse?  It's when the Moon passes between the Earth and the Sun. The darkness is the Moon's shadow.

"When the sun is about halfway or 3/4 of the way covered, if you have a shade tree around and you look at the sunlight filtering down through the leaves of the shade tree and look down on the ground, you will see crescents on the ground, 'cause the leaves act like pinhole cameras," said retired NASA astrophysicist Fred Espenak, who is known as "Mr. Eclipse."

"Just before totality, the sky starts getting dark, and you get one bright bead on the edge of the sun's disk that's called the diamond ring effect. And then the Sun, its disk, is completely covered, and the corona is revealed in all its glory."

Espenak has witnessed 27 solar eclipses; he met his wife at one. So it should come as no surprise that he lives in the Arizona desert, far from city lights, in a development called Sky Village, where residents all have their own observatories.

The name for an eclipse chaser like Espenak is "Umbraphile" (or lover of shadows).

Science writer David Baron is another self-proclaimed umbraphile. He's seen five eclipses. "My first was in Aruba in 1998," he said. "It was the most awe-inspiring, I dare say, spiritual experience I've ever had. And I say this as a science journalist."

Baron's new book, "American Eclipse" (Liveright), recalls an earlier era's eclipse sensation, on July 29, 1878: "The path that the Moon's shadow took went right across the Wild West, from Montana Territory down to Texas. Dozens of American astronomers headed out to the west to observe that eclipse. The most prominent scientist to come out that year was Thomas Edison."

Edison had just invented the phonograph. Even by today's standards, he was a media star.

"Edison's involvement in the eclipse definitely helped raise the profile of the eclipse overall," said Baron. "And the very day after he returned from the eclipse, he started work on a new project, and that was the light bulb."

The 1878 eclipse was critical to the prestige of a nation not yet taken seriously as a force in science.

"It was one of those key events that really did lead the country not too much later, by 1900, to be an equal with Europe in terms of science -- and then, really, to excel and exceed Europe," Baron said.

As for prime eclipse viewing spots, if the Wild West seemed exotic in 1878, Makanda, Illinois, population 600, might qualify today.

According to Dave Dardis, the path of totality runs right through the workshop where he is making and selling eclipse art, happily expecting to cash in on his amazing good fortune -- that totality here will be longer than almost anywhere else on Earth (2 minutes and 40 seconds!).

It's the probability of not hundreds, but thousands of people showing up in Makanda that has volunteer eclipse coordinator Joe McFarland feeling a little panicky. He said, "I'm feeling more excited than terrified, but I'm a little terrified. Look around you; how many people could fit in this little, tiny valley?"

"So it's about withstanding the eclipse?" Teichner asked. "As opposed to just enjoying it?"

A little further along the path of totality is Hopkinsville, Kentucky, where the message is, "Bring it on." The economic impact of an anticipated 100,000 visitors is expected to be $30 million.

In addition to a prime Hopkinsville location to view the shadow of the Moon, Casey Jones Distillery is offering moonshine: 100 proof corn liquor, at $40 a bottle.

Arlon "Casey" Jones makes the stuff by hand in the same kind of still his grandfather, the original Casey Jones, used during Prohibition. "Our total eclipse, we guarantee the lights out. You can have an eclipse any time you want!" he said. "You don't have to wait. And I assure you if you have an eclipse with this, it's gonna last a lot longer than two minutes and forty seconds!"

"It is potent!" laughed Teichner, sampling it.

A little moonshine might prepare you for what will be happening nearby in Kelly; the eclipse will coincide with the annual Kelly Little Green Men Days Festival … taking place exactly 62 years to the day after Geraldine Sutton Stith's father and ten other friends and family members claimed to have had an alien encounter.

Stith showed Teichner the spot where aliens supposedly landed. "There still a brown spot over there," she said. "They saw this little three, three-and-a-half-foot tall being coming out from the woods."

And it looked like what?  "Well, nothing they'd ever seen before! It had a huge head, huge ears, big glowing eyes, its little arms almost touched the ground, and it was floating on top of the ground."

Given the spooky timing with the eclipse, might they come back? "In a way, I would love it to happen," Stith said, "because it would prove it -- and in another way I'm like, Oh my God, you can come but don't take me with you!'"

Let no one say that the Great American Eclipse of 2017 will not be memorable. Fred Espenak, Mr. Eclipse, has this advice for anyone seeing a total eclipse for the first time:

"The thing to keep in mind is not to get so carried away with cameras and stuff that you miss the event itself," he said. "Comparing natural phenomena on a scale of one to ten, a partial eclipse might be a three or a four. A total eclipse is a million!"