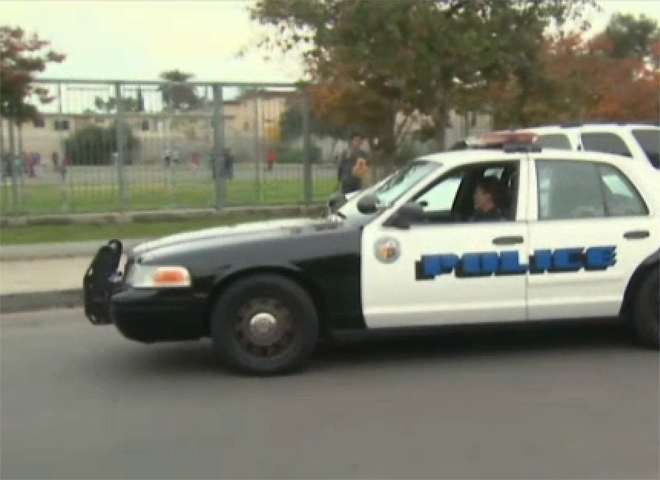 CBS Station KCBS reports that The LAPD, the sheriff's department and other law enforcement agencies will add random daily patrols to more than 600 elementary and middle school campuses in the Los Angeles Unified School District, with officers expected to visit schools as many as three times a day. They will meet with principals, teachers and other school staff, and even parents.

Local law enforcement will add charter and private schools to their watches, if requested.

Last month Police Chief Charlie Beck told KCBS correspondent Kara Finnstrom that he wanted to implement a program in which officers would check in on schools at least once a day. "I don't want anyone to think they can walk into a school in Los Angeles and be immune from the police, 'cause you won't be," Beck said.

Beck emphasized that the increased patrols are a precautionary measure.

The remark was made days before NRA CEO Wayne LaPierre told a Washington, D.C., press briefing of the gun advocacy organization's proposal to have armed police stationed at every school in America.

In addition to the new rounds, school district officials are evaluating current safety measures, and police officers have undergone additional training. "As a refresher course to use, we have all gone through some additional training to work on those crisis-related issues, tactics should, God forbid, something were to come our way, we will be best prepared," Officer Sara Faden said.

Other schools around the country have increased security measures following the Newtown shooting.

CBS Station KYW reports that the Philadelphia suburb of Upper Merion, Pa., will see increased police presence at their schools for at least the remainder of the school year. The school district has given the police department key cards which will allow them access to any school in the district, to be randomly patrolled on a daily basis.

Police in several communities in Rhode Island are also increasing patrols at schools, according to CBS Affiliate WPRI. In an email to parents, the principal of Waterman Elementary School in Cranston, R.I., said, "A uniformed officer will visit Waterman daily to familiarize himself/herself with school, students, staff, and administration."

Last week in Marlboro, N.J., armed police officers were stationed at all eight of the town's K-8 schools.