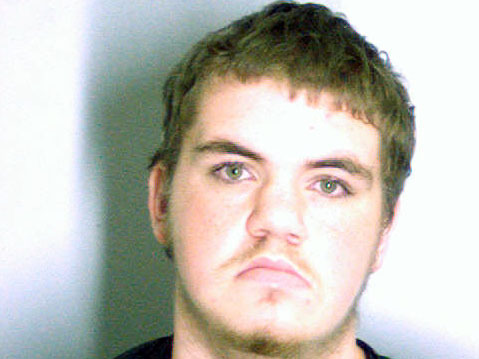 DECATUR, Ga. A man with an assault rifle and other weapons exchanged gunfire with officers Tuesday at an Atlanta-area elementary school before surrendering, a police chief said, with dramatic overhead television footage capturing the young students racing out of the building, being escorted by teachers and police to safety. No one was injured.

Just a week into the new school year, more than 800 students in pre-kindergarten to fifth grade were evacuated from Ronald E. McNair Discovery Learning Academy in Decatur, a few miles east of Atlanta. They sat outside along a fence in a field for a time until school buses came to take them to their waiting parents and other relatives at a nearby Wal-Mart.

When the first bus arrived about three hours after the shooting, cheers erupted in the store parking lot from relieved relatives, several of them sobbing.

The suspect, identified later as 20-year-old Michael Brandon Hill, fired at least a half-dozen shots from the rifle from inside McNair at officers who were swarming the campus outside, the chief said. Officers returned fire when the man was alone and they had a clear shot, DeKalb County Police Chief Cedric L. Alexander said at a news conference. Hill surrendered shortly after and several weapons were found, though it wasn't clear how many, Alexander said. Police had no motive.

An arrest report obtained by CBS News late Tuesday found he was arrested on March 13, 2013 for making "terroristic threats." It was not clear Tuesday what those threats involved.

They observed the shooter firing into the air, he then went inside the building to the school office where he saw the deputies and apparently immediately dropped his weapon and got on the ground, reported CBS News Senior Investigative Producer Pat Milton.

Though the school has a system where visitors must be buzzed in by staff, the gunman may have slipped inside behind someone authorized to be there, Alexander said. The suspect, who had no clear ties to the school, never got past the front office, where he held one or two employees captive for a time, the chief said. Hill is charged with aggravated assault on a police officer, terroristic threats and possession of a firearm by a convicted felon.

A woman in the office called WSB-TV to say the gunman asked her to contact the Atlanta station and police. WSB said during the call, shots were heard in the background. Assignment editor Lacey Lecroy said she spoke with the woman who said she was alone with the man and his gun was visible.

"It didn't take long to know that this woman was serious," Lecroy said. "Shots were one of the last things I heard. I was so worried for her."

School clerk Antoinette Tuff in an interview on ABC's "World News with Diane Sawyer" said she worked to convince the gunman to put down his weapons and ammunition.

"He told me he was sorry for what he was doing. He was willing to die," Tuff told ABC.

She told him her life story, about how her marriage fell apart after 33 years and the "roller coaster" of opening her own business.

Then Tuff said she asked the suspect to put his weapons down, empty his pockets and backpack on the floor.

"I told the police he was giving himself up. I just talked him through it," she said.

DeKalb County Schools Superintendent Michael Thurmond praised faculty and authorities who got the young students to safety, staying calm and following plans in place. All teachers and students made it out of the school unharmed.

"It's a blessed day, all of our children are safe," Thurmond said at the news conference. "This was a highly professional response on the ground by DeKalb County employees assisted by law enforcement."

School volunteer Debra Hayes said she encountered the suspect without knowing it.

She stopped by the office at the end of her shift and saw a man talking to a secretary but she did not see a gun.

"I heard him say, `I'm not here to harm any staff or any parents or students. He said he wanted to speak to a police officer."

"By the time I got to 2nd Avenue, I heard gunshots," she said.

Complicating the rescue, bomb-sniffing dogs alerted officers to something in the suspect's trunk and investigators believe the man may have been carrying explosives, Alexander said. Officials cut a hole in a fence to make sure students running from the building could get even farther away to a nearby street, he said. SWAT teams then went from classroom to classroom to make sure people were out.

Police had strung yellow tape up blocking intersections near the school while children waited to be taken to Wal-Mart where hundreds of people were anticipating their arrival. The crowd waved from behind yellow police tape as buses packed with children started pulling up along the road at the store. The smiling children waved back.

Regional superintendent Rachel Zeigler used a megaphone to say children were organized on the buses by grade level and that each bus would also be carrying an administrator, a teacher and a Georgia Bureau of Investigation officer. Relatives had to show ID, sign each child out and have their photo taken.

The school has about 870 children enrolled. The academy is named after McNair, an astronaut who died when the space shuttle Challenger exploded on Jan. 28, 1986, according to the school's website.

Jonessia White, the mother of a kindergartner, said the school's doors are normally locked.

"I took (my son) to school this morning and had to be buzzed in," she said. "So I'm wondering how the guy got in the door."

Jackie Zamora, 61, of Decatur, was at the Wal-Mart waiting and said her 6-year-old grandson was inside the school when the shooting was reported and she panicked for more than an hour because she hadn't heard whether or not anyone had been injured.

Since shootings in classrooms all over the country, the massacre at Connecticut's Sandy Hook Elementary being the freshest in people's minds, schools have implemented security from metal detectors to armed guards. McNair had its own safety precautions.

White said the school has a set of double doors where visitors must be buzzed in and show identification to a camera to be allowed in.

"I don't know how this could happen at this school," Zamora said. "There's so much security."