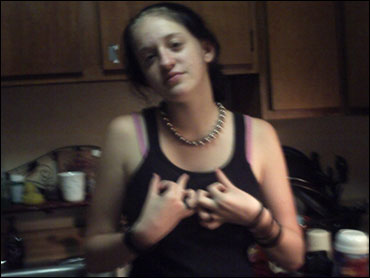 HAGERSTOWN, Md. (AP) A 16-year-old Maryland girl faces life in prison after a jury convicted her Wednesday of soliciting the murder of her father by asking a friend on a school bus to "take care of him" to end the beatings she claimed to have endured.

When the verdict was read, Danielle Black blinked and swallowed, then nodded when her lawyer softly asked if she was all right. Her father, Billy Lee Black, 47, was stabbed to death early Halloween morning in an alley behind the family's rented duplex in the West End of Hagerstown, a city of 40,000 about 70 miles west of Baltimore.

After a one-day trial, the Washington County Circuit Court jury of seven men and five women deliberated about 90 minutes before convicting her of solicitation to commit first-degree murder. A sentencing date was not set.

Alec Eger, 20, who is charged with killing her father, told police that he was Danielle's friend. However, he isn't the same person she was convicted of soliciting on the bus.

Police have found no evidence the girl was abused. However, one of the teenage witnesses testified that Danielle had shown her a thigh bruise and arm scratches that she claimed came from her father's beatings.

Black's widow, Andrea, testified that her husband had tried to keep Danielle from running with the wrong crowd.

"He wouldn't let her go with her friends when she wanted to," she said.

Deputy State's Attorney Joseph S. Michael portrayed the defendant in his closing argument as a girl so filled with "twisted hatred" for her father that she often told friends she wanted him dead and even wrote poems about it. He said after the verdict that her motive was a mystery.

"I have been involved in many tragic cases and circumstances and cannot think of any that are more tragic than patricide or solicitation to commit patricide," Michael said.

Drawbaugh argued that Danielle and Matthew Gray, the boy she approached on the bus, were typically dramatic teens. She said Danielle's poems, with lines including, "If you do it again, you won't have a life to live," were "creative fiction."

The state's case relied on Danielle's writings and a handful of sometimes difficult teenage witnesses. Gray, 18, a high-school dropout, testified under a grant of immunity that Danielle had asked him on the school bus to "take care of" her father, not kill him, as police say he initially told them.

Police say Danielle was then overheard telling Gray she would have "Alec" and "Joey" do it.

Gum-chewing witness Samantha Holliday, 14, testified that she overheard Danielle's conversation with Gray, but she insisted it was on the afternoon of Oct. 31, hours after Black was killed. That contradicted her statement to police that the conversation occurred days earlier.

Danielle told police, in a statement jurors didn't see, that she only wanted her father roughed up, not killed.

In court, she wore her blonde hair in braided pigtails bearing traces of the black dye that was part of her "goth" look at the time of the stabbing.

A social worker testified during a hearing in May that Danielle's parents divorced when she was about 2 and she was raised by her father, a tree-maintenance worker. He remarried in mid-2007, the social worker said.

Black reportedly had quit drinking several years before his death and after threatening to shoot himself in front of Danielle and her older brother, the social worker said.