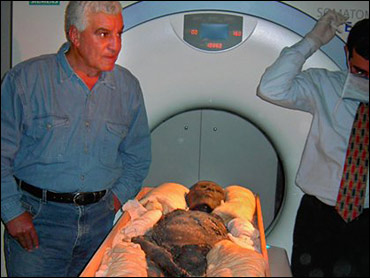 A team of researchers briefly removed King Tut's mummy from its tomb on Wednesday and laid bare his bones for a CT scan that could solve an enduring mystery: Was it murder or natural causes that killed Egypt's boy pharaoh 3,000 years ago?

Tut's toes and fingers and an eerie outline of his face could be seen as the mummy, resting in a box to protect it, was placed inside the machine in a specially equipped van, parked near his underground tomb in the famed Valley of the Kings.

The 1,700 images taken during the 15-minute CT scan could answer many of the mysteries that shroud King Tutankhamun's life and death, including his royal lineage, his exact age now estimated at 17, and the cause of his death.

A simpler X-ray done 36 years ago showed bone fragments inside the skull of Tut — who was buried in a "hurried" fashion in a glitter of gold treasures, said Zahi Hawass, Egypt's chief archaeologist. But that previous test wasn't sophisticated enough to determine if the bone fragments signified a blow to the head.

The CT scan, in contrast, will provide a far more detailed, three-dimensional view of the scattered bones and coverings that make up Tut's mummy.

CT imaging has been used for numerous Egyptian mummies in the past, including one of famed pharoah Ramses I. It also was used on the 5,200-year-old remains of a Copper Age man found frozen in 1991 in a glacier in the northern Italian Alps. In that case, CT imaging picked up what simpler X-rays had failed to — identifying an arrowhead in the iceman's body that possibly killed him.

YouTube says the battle with TV is already over

Hawass, part of the 10-man team that conducted Wednesday's tests, said the results of the Tut scan will be announced later this month in Cairo.

"There are so many stories about his death and his age," Hawass said. "Today we will determine what really happened."

The removal of the mummy from its tomb — the first time in 82 years — also showed it is in bad condition and Egyptian officials will begin a "process of restoration to protect and preserve it," Hawass said. The mummy was returned to the tomb after the scan and all restoration will be done there, he said.

The short life of Tutankhamun has fascinated people since his tomb was discovered in 1922 by a British archaeologist, revealing a trove of fabulous treasures in gold and precious stones that showed the wealth and craftsmanship of the Pharaonic court.

A U.S. museum tour a quarter-century ago of Tut's treasures drew more than 8 million people. A smaller number of treasures — minus Tut's famous gold mask — will again go on display in the United States starting June 16 in Los Angeles, after touring Germany and Switzerland.

The decision to allow the exhibit marked the reversal of an Egyptian policy set in the 1980s that confined most of the objects to Egypt, after several pieces were damaged on international tour.

Archaeologists have long wondered if Tut was murdered. Hawass said one factor included the fact that the conditions of his burial in the tomb seemed "hurried."

Tutankhamun ruled about 3,300 years ago and is believed to be the 12th ruler of ancient Egypt's 18th dynasty. He ascended to the throne at about the age of 8 and died around 1323 B.C. at approximately 17.

Tut's lineage also has long been in question. It's unclear if he is the son or a half-brother of Akhenaten, the "heretic" pharaoh who introduced a revolutionary form of monotheism to ancient Egypt and who was the son of Amenhotep III.

The CT scan, conducted under rare cloudy skies in the valley on the Nile's west bank, began with the removal of the wooden box that holds Tut's mummy from underneath a stone sarcophagus in the underground tomb. Tourists to the tomb see only that stone covering.

The box holding the mummy was then carried up stone steps out of the vault. Coverings, which appeared to be insulation-like material, were then pulled back. The blackened mummy, still resting in the box to protect it, was then inserted into the CT machine.

The machine, brought from Germany, was donated by Siemens and National Geographic, Hawass said.

National Geographic executive vice president Terry Garcia said his organization would fund the project for about five years, during which many Egyptian mummies would be scanned to determine how best to preserve them and learn more about their health before they died. A documentary is also in the works.

"The most pressing purpose of this work is conservation, and through the imaging work we can determine what steps might be necessary to conserve them," Garcia said. "Then we will also be trying to get a better picture of health and disease in ancient Egypt."

Egyptian officials had previously announced they were planning the tests, but did not give a date and did not inform most media ahead of time. Hawass has given exclusive rights to film archaeological events to certain media in the past in return for financial assistance or research help.

The mummy had not left the tomb since the British archaeologist Howard Carter excavated the tomb 82 years ago. Hawass said Carter's team damaged the mummy as they used sharp tools to prize off the famous gold and blue mask.

The examination had raised a row among archaeologists and officials in Egypt, who insisted the mummy not be taken from Luxor, and that the research be done by Egyptians. The researchers originally had planned to move the mummy to the Egyptian Museum in Cairo for examination, but altered that after the outcry.