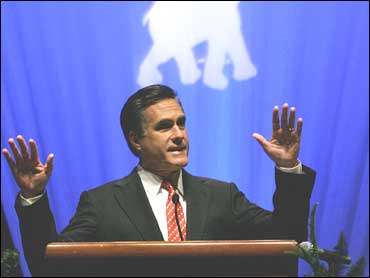 The immigration compromise between key senators and the White House played strongly at the convention as more than 1,000 delegates and Republican activists gathered. Many in the crowd wore stickers with "Senate amnesty bill" crossed out.

They cheered as presidential candidate Romney told them: "One simple rule: No amnesty."

During his speech and before his remarks, Romney said a proposed new visa for immigrants amounts to amnesty if it can be renewed indefinitely.

"If that's not a form of amnesty, I don't know what is," Romney said.

The crowd booed South Carolina U.S. Sen. Lindsey Graham, a key ally of McCain in both his 2000 and 2008 presidential bids, when he said he had worked with U.S. Sen. Ted Kennedy, D-Mass., on the immigration legislation.

"It's the best bill I think we can get to President Bush," Graham said as some in the crowd shouted "No!"

Graham was cheered earlier in his speech when he talked about the war in Iraq.

After the speech, Graham said he was booed on immigration because "it's an emotional topic. People are mad."

South Carolina's other U.S. senator, Jim DeMint, is on opposite sides from Graham: He supports Romney and said he opposes an immigration bill that allows permanent residency of illegal aliens.

But some at the convention ridiculed Romney and accused him of being a Republican in name only, because of his changing stances on gun control, gay marriage and abortion.