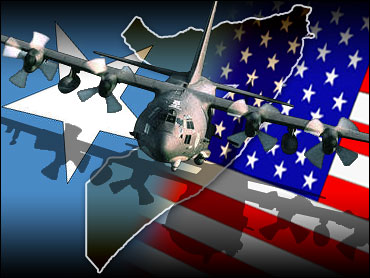 This column was written by Daveed Gartenstein-Ross


Less than a month ago, the situation in Somalia seemed dire. The Islamic Courts Union (ICU), a radical group that is affiliated with al Qaeda, was on the brink of destroying the U.N.-recognized transitional federal government (TFG). Seventeen terrorist training camps were operational and terrorists from Afghanistan, Chechnya, the Arabian peninsula, and other places were flocking to Somalia to train in or staff these camps. ICU leaders brimmed with confidence.

But when the ICU began what it intended as the final assault on Baidoa, the south-central Somali city to which the TFG had been relegated, the Ethiopian military (which was protecting the TFG) responded with greater force than expected. The ICU had no good response to Ethiopian airpower. And recent revelations by U.S. intelligence and TFG officials show that U.S. air and ground forces were active from the outset, including CIA paramilitary officers, Special Operations forces, Marine units, and helicopter gunships. The Ethiopians and TFG took Mogadishu from the ICU on December 28 and have reversed most of the ICU's geographic gains.

The ICU is now preparing an insurgency, just as the head of its executive council, Sheikh Sharif Sheik Ahmed, has called for. A senior military intelligence officer told me that ICU forces' tendency to "melt away" as Ethiopian troops advance is reminiscent of the Taliban's dispersal after Kandahar fell in Afghanistan.

While the Somali war is far from over, this is an appropriate time to consider the likely future of the conflict: America's decisions over the next few weeks will have a great impact on the success or failure of the mission.

There is currently reason for optimism. While some observers seem certain that the Islamic Courts will succeed in mounting a powerful insurgency, it is important to note that this is not what the ICU wanted. The Islamic Courts expected to rout the Ethiopian forces protecting Baidoa and kill or capture the TFG's leaders. For them, insurgency is the last resort, not the master plan.

But just because insurgency is a last resort does not mean that it cannot succeed. A confidential U.N. report on Somalia released in late 2006 warned that "the ICU is fully capable of turning Somalia into what is currently an Iraq-type scenario, replete with roadside and suicide bombers, assassinations and other forms of terrorist and insurgent-type activities."

One factor that will determine whether the ICU successfully launches an insurgency in the near future is the scope of the losses it suffers on the battlefield now. Military intelligence analysts feel that the ICU will bounce back unless a significant portion of its fighters are killed or captured. There appears to be an important opportunity at present: a large number of ICU fighters are massed in Ras Kamboni, a coastal town near the Kenyan border where they appear to have gone to regroup.

Estimates of the number of ICU fighters in Ras Kamboni provided by intelligence analysts and sources within the TFG vary widely. The number of fighters has been placed as low as 600 and as high as 5,000. But clearly there is a significant contingent. ICU members in Ras Kamboni appear to be communicating with high-level al Qaeda leaders: according to a senior military intelligence officer, their calls for assistance motivated Ayman al-Zawahiri's January 5 tape which urged his followers to go to Somalia to fight alongside the ICU.

Ethiopian, TFG, and American forces are currently forming a cordon around Ras Kamboni in an effort to prevent ICU fighters from escaping. But there are signs that the ICU is also attempting to regroup in Kenya and Yemen, just as the Taliban regrouped in Pakistan after it was toppled from power in Afghanistan.

Beyond the question of how many ICU fighters can be taken out of action in the next few weeks, another critical military question is how long Ethiopia will continue its push. When Ethiopia intervened in Somalia in the mid-1990s to break up the radical al-Ittihad al-Islamiyya, it allowed the group's core leadership to escape intact. Those leaders went on to form the Islamic Courts. If Ethiopia does not finish the job this time, there will, again, be long-term consequences.

But the war in Somalia will not be won through military might alone. The ICU's rise was aided by the lawlessness that prevailed in the country after president Mohamed Siad Barre's fall in 1991. Rival warlord factions followed. A Council on Foreign Relations backgrounder points out that "[t]he warlords' militias were notorious for indiscriminate violence: Women and girls were often raped and locals could not move about the city without fear of being killed."

Some Somalis were willing to accept the ICU's strict version of sharia (which even entailed shooting people who tried to watch soccer matches) because they viewed the group as a stabilizing force. If the country again descends into chaos, that could help the ICU rise again.

TFG cabinet member Dahir Jibreel, the permanent secretary in charge of international cooperation, is currently in the Washington, D.C. area attempting to raise needed money for the ministry of foreign affairs. He told me that although the U.S. government has allocated $56 million to Somalia, it's not clear how much money will reach the TFG. Some money has been earmarked for an anticipated African Union peacekeeping force, while other funds will go to nongovernmental organizations.

Jibreel said that the transitional government has "acute needs": TFG soldiers and civil servants aren't receiving salaries, and the government hasn't been able to establish tax collection yet. Although he is "very happy that there is a concern at all levels for the situation in Somalia," he hasn't received any guarantees.

"At the end of the day, we want appropriations," Jibreel said. "We want money and resources to be given to implement what has to be done. The security forces of Somalia have to be established and maintained, the civil servants have to be paid, the democratic system has to be invested in, and we have to overcome the militias that are marauding around. We need resources — not earmarking for NGOs or U.N. organizations, but actual direct financial and technical assistance."

It is essential that the transitional government receive the aid it needs to work toward a stable and secure civil society in Somalia. As blogger Bill Roggio noted, "The lesson of the last four or five years is that it's not hard to win the war. It's hard to win the peace." If we lose the peace in Somalia, we may feel the repercussions for years to come.
By Daveed Gartenstein-Ross
Reprinted with permission from The American Prospect, 5 Broad Street, Boston, MA 02109. All rights reserved