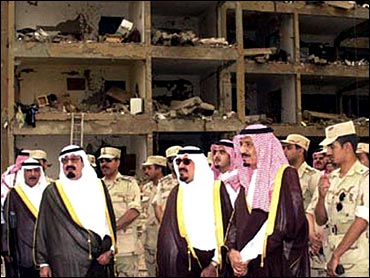 Nine attackers were among the dead. Another 194 people were wounded, most of them not seriously, according to Saudi officials; 40 were said to be Americans.

"These despicable acts were committed by killers whose only faith is hate, and the United States will find the killers, and they will learn the meaning of American justice," President Bush said.

The State Department is ordering all non-essential U.S. government personnel and their families out of Saudi Arabia after the latest terror attack on American citizens.

The attackers shot their way into three housing compounds in synchronized strikes in the Saudi capital Monday night and then set off multiple suicide car bombs. It was the deadliest terror attack on Americans since Sept. 11, 2001.

The FBI said it would send agents to join the investigation. Though no one claimed responsibility for the attacks, Secretary of State Colin Powell, who arrived in Saudi Arabia for an official visit hours after the blasts, said they had "the fingerprints of al Qaeda."

"This was a well-planned terrorist attack," said Powell. "Obviously the facility had been cased, as had the others. Very well executed."

But not very well defended, reports CBS News National Security Correspondent David Martin, even though U.S. officials say the American ambassador had asked the Saudis to tighten security in response to a growing number of signs al Qaeda was planning an attack.

The first signs came from interrogations of al Qaeda prisoners and from intercepted communications. Then, last week, Saudi officials raided a safe house and found a weapons cache that included 800 pounds of explosives. The terrorists got away and the Saudis launched an unsuccessful manhunt for 19 suspected members of al Qaeda. They apparently didn't go very far. That safe house was just hundreds of yards away from one of the compounds.

CBS News Reporter Charles Wolfson, traveling with Secretary Powell, was one of the very few Western journalists in Riyadh Tuesday.

Wolfson reports Powell braved a sandstorm to tour the rubble at one of the housing complexes where U.S. citizens had been killed.

The building had been housing for about 70 people, most of them Americans. They were mainly former U.S. soldiers training the Saudi National Guard in maintaining internal security – a perfect target for terrorists.

The death toll would have been much higher except for one bit of luck. Last night, 50 of the men were out on desert training when the bombers struck. The clock on the wall stopped just before 11:30 p.m., the hour of the attack.

The scale of the damage shows just how powerful the bomb was. It tore the front off what once was a four-story building; broken glass was everywhere. Virtually every building in the compound, which extended for several blocks, suffered damage. The crater from the blast was at least 10 feet deep.

The Riyadh attack came as the United States is pulling out most of the 5,000 troops it had based in Saudi Arabia, whose presence fueled anti-American sentiment. U.S. Defense Secretary Donald H. Rumsfeld said last week that most would be gone by the end of the summer.

Osama Bin Laden has repeatedly railed against the presence of what he calls "infidel" troops on Muslim holy land.

Crown Prince Abdullah, the kingdom's de facto ruler, went on national television Tuesday evening to describe those behind the attacks as "criminal butchers, devoid of any Islamic or human values" and "beasts, seeking only to shed blood."

He quoted verses from the Quran against murder, adding, "There is no other interpretation: These killers are cursed here on Earth, and in the hereafter their fate is hellfire."

A Saudi Interior Ministry official was quoted as saying that attackers used cars packed with explosives in "suicide operations." He said the blasts also killed seven Saudis, two Jordanians, two Filipinos, one Lebanese and one Swiss at the three compounds.

Authorities also found nine charred bodies believed to be those of the suicide attackers, a Saudi Interior Ministry official said.

U.S. Ambassador Robert Jordan said at least 40 of the injured were Americans.

The attacks were followed by a smaller bombing Tuesday near the headquarters of a Saudi-U.S. company. No casualties were reported.

A guard at one of the housing compounds in the northeastern section of Riyadh was quoted by the Saudi paper al-Watan as saying that seven cars exploded there, all apparently carrying suicide bombers. At least three bodies could be seen lying on the ground at the compound Tuesday morning.

Most of the homes in such compounds are large, single-family villas that would not be out of place in an upper-middle class California. Behind high walls, Westerners can escape Saudi restrictions such as the requirement that women appear outside the home only in enveloping robes and enjoy well-tended parks, swimming pools and sports fields. Their inhabitants tend to be professionals in the oil industry, the financial sector or schools.

Saudi Arabia has a large population of expatriate workers, including about 35,000 Americans.