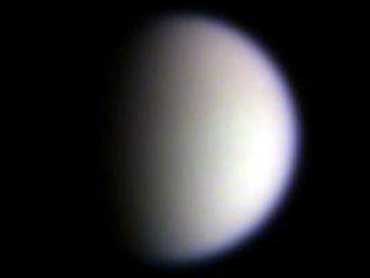 Saturn's planet-size moon Titan has dramatic weather, with freezing temperatures, carbon- and nitrogen-rich clouds and possibly lightning, scientists said Wednesday, describing a world that may have looked like the Earth before life developed.

The European Space Agency's probe landed on Titan's surface in January, uncovering some mysteries of the methane-rich globe, the only moon in the solar system known to have a thick atmosphere. Scientists presented detailed results of months of study on Wednesday in the journal Nature and at a news conference in Paris.

Titan has long intrigued researchers because it is surrounded by a thick blanket of nitrogen and methane. Until recently, scientists believed the most likely explanation for the methane was the presence of a methane-rich sea of hydrocarbons.

The Huygens probe and its mother ship, Cassini, have offered evidence against that theory. The $3.3 billion Cassini-Huygens mission to explore Saturn and its moons was launched in 1997 from Cape Canaveral, Florida, a joint effort involving NASA, ESA and the Italian space agency.

The aerosols that form Titan's clouds are made from molecules that include carbon and nitrogen, compounds generated in photochemical smog and circulated by rain and the atmosphere, researchers reported in Nature.

Researchers said there was no reason to believe Titan's methane is a product of biological activity.

Yet more methane is appearing constantly and may burst from ice volcanoes or fall as rain, researchers said, describing riverbed and drainage channels spotted during the craft's descent Jan. 14.

Scientists described the moon's freezing temperatures: minus 290 Fahrenheit at the surface. The atmosphere has distinct layers and may offer evidence of lightning.

Titan's smoggy atmosphere may be similar to that of the primordial Earth, and scientists believe that studying it could provide clues to how life began.

The first results from the Huygens probe were released in January: Black-and-white photos showed a rugged terrain of ridges, peaks, vein-like channels and apparently dry lakebeds on the moon 740 million miles away.

The European Space Agency on Wednesday was also to release details from Mars Express' first radar sounding of the red planet, offering clues about its climate, surface and atmosphere.