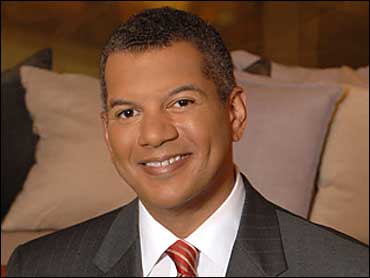 Jan. 6 was a bittersweet day for everyone at The Saturday Early Show; sweet because after more than nine years of waking up before the crack of dawn every Saturday morning, co-anchor Russ Mitchell will finally get to sleep in, but only on Saturdays! As of Monday, Jan. 8, he was set to begin his new job as news anchor on the weekly Early Show.

To help the bitterness of the Saturday goodbye, the people on the show prepared a video tribute to Mitchell, to give him a proper send-off.

A lot has changed since the Saturday morning show debuted on Sept. 17, 1997. The broadcast has a new name, a street-side studio and Mitchell himself has had many difference partners, including Susan Molinari, Thalia Assuras, Gretchen Carlson and the current Tracy Smith.

He has always encouraged the audience to take it easy but news is the first order of the day and there's been no shortage: Elian Gonzalez, Hurricane Rita, and the Space Shuttle Columbia are among the stories he has anchored.

In tribute to Mitchell, Mallika Marshall, the medical correspondent for The Saturday Early Show, said, "You are the quintessential gentleman. You are kind, you are smart, you are classy and there really isn't anybody out there who could take your place. Those of us who have known you on the weekends, now we get a full dose of you. A full weekly dose of you is what it's going to be like but a lot of people are going to be missing you on the weekend."

Former co-anchor Assuras (who is a CBS News correspondent) said, "You are the anti-diva in this business. You are a class act and every moment of the three years I worked with you, I enjoyed mainly because of you and the fact you were sitting next to me."

Smith said, "You have been a fabulous partner, a teacher and a friend. As I told you once in an e-mail, my love for you grows like Andy Rooney's eyebrows."

And, just for fun, the farewell video included a tribute from recording artist Gino Vannelli, who appeared in the program's Second Cup Café, a special wish of Mitchell's. Said Vannelli: "Congratulations. It couldn't happen to a nicer guy. And as they say in Quebec, bonne chance."

After viewing the tribute, Mitchell observed, "One of the things that makes this easier for me is I'm just changing jobs. I am staying right here at the The Early Show family. I will still work with you (Smith) from time to time and still work with everybody in the room, all the staff, so that makes it easier. But it's been a fabulous run for me here."

Smith gave Mitchell a parting smooch on the cheek and then immediately (and apologetically) wiped the lipstick mark off Mitchell's face, prompting him to comment, "There are worse things than having lipstick stains from Tracy Smith, believe me."

He continued, "You guys are so sweet. It's bittersweet, as you said. It's been a fun nine years. I will miss coming here Saturday mornings and working with you guys."

Weather reporter Ira Joe Fisher, a regular on the program for seven years, joined the farewell party by satellite. He told Mitchell, "What's really important is, you are the kind of person on whom
(one) can depend. You are that friend who can be very serious and grave and scholarly when the situation warrants."

As for Mitchell, he had a tribute of his own for his Saturday Early Show colleagues, especially co-anchor Tracy Smith, saying, "I think anybody in this business will tell you it's so important that you like and trust the people you work with." And it has made a difference to him that Smith was sitting beside him, someone he could always count on to pick him up if something on air went awry.

Laura Bush on Life After the White House