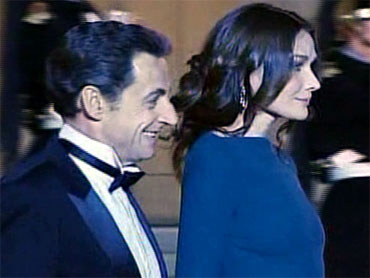 Could the president of France and his first lady be cheating on one another?

And has that pushed the President Nicolas Sarkozy into the arms of his junior environment minister, Chantal Jouanno?

Interviewed last week by Britain's Sky-TV, Bruni seemed to suggest it's nonsense, saying she trusts her husband very much.

"He would never have affairs," she said. "And have you ever seen a picture of him having an affair? Ah. So!"

And their marriage, she said, is like a fairy tale. But is "happily ever after" possible, according to the first lady?

She told Sky-TV, "I guess marriage should be forever but, umm... who knows what happens. I wish it was forever; that's my hope. But it could be dead tomorrow."

Sarkozy was to visit Britain Friday -- where the press has an appetite for this sort of speculation. But in France, say the French, they don't.

Jacques Reland, of the Global Policy Institute, a research organization, said, "They don't care whether they are faithful husbands or not. They think that every human being has foibles, that politicians are humans and if you commit some sexual peccadilloes it's acceptable."

If it wouldn't even matter if the gossip were true, Roth adds, consider this: A report in France released Thursday asserts it's not; and claims the rumors were started as an Internet hoax.

Psychotherapist Heide Banks, a relationship expert, appeared on "The Early Show" to discuss the marriage behavior with these rumors in mind.

Banks said even if the pair isn't monogamous, it's important to be true to who you are and represent yourself honestly in your relationship.

"I would say the percentage of success in open marriages is less than half of one percent, if that much. To even attempt it," she said. But you've got to look at this, this is like France's version of a Hollywood marriage. How many Hollywood marriages make it?"

If the rumors are true, and Sarkozy and Bruni called Banks for advice, she said she would tell them sit down and decide together if they're interested in an intimate relationship.

Banks said, "When she got to the altar, the first thing she said was, 'love, honor and I hope it works out.' I don't know how many weddings you've been to where that's been the statement. But, I do hope it works out for them. It's possible. Would I put my money on it? Probably not."