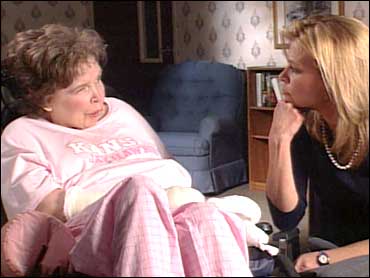 Sarah Scantlin's case is one of those medical miracles that takes all of us by surprise, and forces some hard questions, like what is consciousness? And can the brain rewire itself after traumatic injury?

After following Sarah's story for close to two years, we are just beginning to find out, reports CBS News The Early Show national correspondent Tracy Smith.

The daughter of a proud Midwestern family, her life at 18 was filled with goose bumps and laughter and promise. But one night in 1984, just after midnight, a drunk driver hit Sarah and threw her into the path of a second car which struck her directly in the head.

Her brain was injured so severely Sarah should have died over 2 decades ago, but did not.

"They never tell you what the prognosis is for a head injury," said Sarah's mother, Betsy Scantlin.

"The brain injury is so severe that the daughter you had is gone," said James Scantlin, Sarah's dad. "It's been destroyed."

Sarah lay motionless for several weeks. When her eyes opened she did not seem awake, her expression blank. Not awake, not asleep. Days led to weeks and to months and the years slowly rolled on.

"Suddenly the phone rings one day," James Scantlin recalls. "Oh boy, that was something."

After 2 decades at life's edge, Sarah was talking.

TIME: The Mystery of Consciousness

TIME: How The Brain Rewires Itself

TIME: The Power Of Hope

But what had suddenly enabled her to speak? And where had she been for 20 years?

No one knows for sure, but looking back, there were clues along the way.

"As I'm walking around the room she would still keep her eyes on me, watching what I was doing," said Jennifer Trammell, Sarah's nurse for 20 years.

At year 14, Sarah began to scream, especially when people left her.

"She yelled at me the whole way out," said Jim Scantlin. "So I could hear her all the way out the door."

Sarah would yell out for six more years.

"It took her that long to try to get out even one word," Trammell said.

"I did feel that there was some increased activity going on within her mind," noted Dr. Brad Scheel, Sarah's doctor.

Scientists now believe Sarah was in a minimally conscious state, a recent designation described as having a very low level of awareness but conscious nonetheless.

Sarah's case differs from Terry Schiavo's case, where a lack of oxygen caused damage to the entire brain, resulting in what doctors call persistent vegetative state. In Sarah's case, parts of the brain were severely damaged in the accident, but other parts that were not damaged struggled to make new connections.

"Minimally conscious is a challenging state, because we don't exactly know what is going on within an individual's brain," said Dr. Bill Brooks, Director of the Hoglund Brain Imaging Center.

"Clearly much of Sarah's brain is still working at some level," Brooks said.

"What we see on quite a few slices is a substantial injury," Brooks said, pointing to a dark portion of Sarah's scan, the damaged portion. "The holy grail of all this is how do we make this stuff do the work that this stuff used to do?"

Sarah seems to recall things from the days at the edge of consciousness.

"I asked her about Oklahoma City and she said 'children, fire,'" Betsy Scantlin said.

"When I mentioned 9/11 what comes to your mind? And she says 'planes hit the building and it went up in smoke,'" Trammell said.

"Clearly, there's a different level of attention and involvement in those, just extraordinary, events that took place on those days," Brooks said. "Perhaps, in Sarah's case, it was enough to get through the fog."

Sarah's short term memory is impaired, but her long term memory is eerily intact. She is 40, but without a concept of time passing, she thinks she's 18.

In some ways its like a baby learning her first words, But Sarah bears the remnants of a sophisticated mind trying to re-connect. Improvements are slow and small, but mighty. No one can tell what's next.

"I've said for years hope is a dangerous thing because with Sarah we had no hope," Jim Scantlin said. "You know, just the mere fact that she can say goodbye and say hello and I love you and give me a kiss. It's just amazing."

Unfortunately, Sarah is the rarest of cases. Experts say her age played a part. Also, the level of care she got was exceptional. Everyone from the nurses to the cleaning staff talked to Sarah every day.