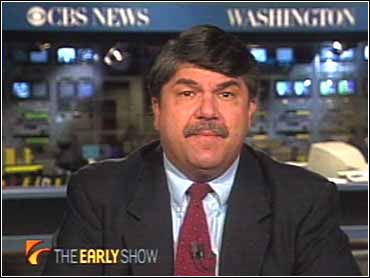 AFL-CIO President Richard Trumka is calling Sarah Palin "almost a parody of herself" who will "go down in history like McCarthy" in a speech in Alaska today.

When it comes to Palin, he plans to say, according to prepared remarks released this morning, "you just have to laugh -- but it's not really funny."

"In this charged political environment, her kind of talk gets dangerous," Trumka will say at the Alaska AFL-CIO Biennial Convention. "'Don't retreat... reload' may seem clever, the kind of bull you hear all the time, but put it in context. She's using crosshairs to illustrate targeted legislators. She's on the wrong side of the line there. She's getting close to calling for violence. And some of her fans take that stuff seriously. We've got legislators in America who have been living with death threats since the health care votes."

Trumka complains about Palin railing against "union thugs" despite the fact that her husband is in a union. He asks: "Is she calling him a thug?"

The term, he argues, is "poisonous."

"There's history behind that rhetoric," Trumka will say. "That's how bosses and politicians in decades past justified the terrorizing of workers, the murdering of organizers."

"Quite frankly, America works because lots of people contribute lots of ideas--that's good--even when some of them are just plain wrong," he will add. "But people need to come to the table in good faith. That's not Sarah Palin. She'll go down in history like McCarthy. Palinism will become an ugly word."

Trumka will make the speech to about 300 delegates and guests at the convention, which has the theme "Defending the Union Way of Life." In addition to Palin, he criticizes Remington Hotel Corporation (which owns and operates Sheraton, Hilton, and other hotel chains) as "one of the biggest union-busters around."

Trumka also plans to go after Sen. Lisa Murkowski, which to some extent suggests the speech was written before Tuesday's shocking primary results that have Tea Party-backed Joe Miller leading the incumbent with only absentee ballots left to be counted. Miller is closely aligned with Palin, who endorsed him in the primary race.

"You've got to get Sen. Murkowski loose from Palin's crazy magnet," he plans to say. "You don't want her to get that far out, too."