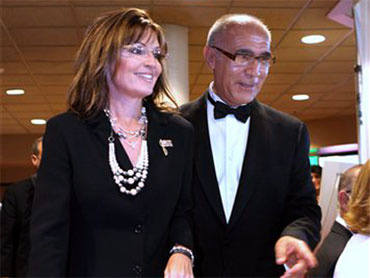 Sarah Palin criticized California Attorney General Jerry Brown Friday over his investigation into her speaking arrangement at a gala dinner at a cash-strapped California university.

The 2008 Republican vice-presidential candidate's speech at the 50th anniversary celebration at California State University, Stanislaus has generated intense intrigue and scrutiny since the nonprofit foundation holding the event first announced her visit in March.

The visit set off a pitched legal feud. Brown launched an investigation into the finances of the university's foundation arm amid allegations that the nonprofit violated public disclosure laws.

"Jerry Brown and friends, come on this is California," she said. "Do you not have anything else to do?"

More than 360 donors paid $500 per ticket to attend the black-tie fundraiser in the school's cafeteria as a throng of students protested her appearance nearby.

"I was expecting quite a few protests, I thought that would be cool," Palin said. "It's been nothing but absolute loveliness here in this part of California, in spite of some of the hoopla around this dinner."

In preparation for her arrival, workers transformed the rural, public school's humble cafeteria into a glitzy Gala Hall, draped with crimson tablecloths and surrounded by chain-link fences. Officials still refuse to divulge the terms of her contract, her speaking fee, or any additional details about the 2008 Republican vice-presidential candidate's trip to California.

News of Palin's requirements only came to light after students fished several pages of the contract from a trash bin, which prompted Brown to launch his investigation.

University spokeswoman Eve Hightower said the extensive fencing and extra security were standard procedure for large campus events, and said the university had remained open to students going to class.

Friday's sold-out dinner was expected to bring in more than $200,000, making the gala the most successful fundraiser in the university's history, said university foundation board president Matt Swanson.

"We're not here to make a political statement, we're here to make money," said Swanson. "This event has surpassed all of our expectations."

Most of the money raised comes from new donors, Hightower said. The funds will help pay for a variety of pressing campus needs, which the foundation will determine after consulting with university officials, she said.

About 100 protesters stood outside the cafeteria on the campus' leafy grounds raising up a Sarah Palin-shaped pinata and signs lettered "Spill, Baby, Spill" and "Open The Books," and chanting about school budget cuts.

The rural university, like dozens of other public colleges, has had to cut some classes and cancel several scholarships as a result of California's ongoing financial woes.

"The campus is spending thousands and thousands of dollars to hire a divisive political figure to come here. There's something wrong with that, when they've turned away people for scholarships," said Josh Esteves, a protest organizer with Valley Progressives, a local left-leaning political group.