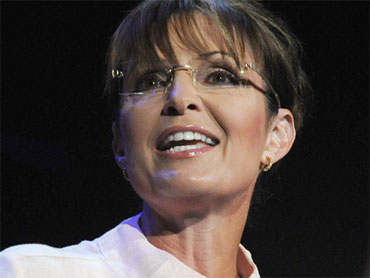 Earlier this week, Vanity Fair released a buzzy profile of Sarah Palin that paints the former Alaska governor as an abusive and foul-mouthed phony who is prone to temper tantrums and disconnected from her roots.

In the subsequent days, critics, including Palin herself, have come forward to question the validity of the piece, with Palin casting reporter Michael Joseph Gross as "impotent" and "limp" for his use of anonymous sources.

The comment prompted gay magazine The Advocate to complain that Palin may be gay baiting in light of the fact that Gross is gay. Washington Post media reporter Howard Kurtz wrote on Twitter that while he agress with "Palin on overuse of unnamed sources," he questioned her calling reporters "impotent" and "limp."

"Did she have to go there?" he asked.

Palin's word choice aside, she is not alone in raising doubts about the story, which got Gross on CBS' "The Early Show" Thursday. In Slate, David Weigel reports that Gross' sources are "deeply unhappy" with the story, and he prints an e-mail to Gross from one of them, Anchorage radio and TV host Shannyn Moore, who says she regrets vouching for his credibility.

She writes that she was portrayed in "a completely inaccurate and unfavorable light" in the story and quips that Gross must be "thrilled" to be on television after breaking agreements with sources who had been promised anonymity.

Politico's Ben Smith, meanwhile, has twice questioned the factual accuracy of the story. On Wednesday, he pointed to a passage claiming that Palin asked aides to her former running mate John McCain when, from a political perspective, it might be good for her then-pregnant daughter Bristol to get married. The story claims Palin "went on to wonder whether one weekend or another would be more advantageous for media coverage."

A former McCain aide, however, told Smith that while he discussed a Bristol Palin campaign wedding with other aides, Sarah Palin was never brought into the conversation, and a stunt-wedding was never seriously considered.

Smith also writes that the story "focuses on Palin's temper, which may well be a real quality but can't be quite as out-of-control as its portrayed: It isn't something the campaign staff -- even the large number of them who derided her as lazy, undisciplined or unready -- complained of."

He goes further in a second post, describing the story as "emblematic of much that's wrong about the way she's covered." Smith reports that while the opening anecdote of the story describes son Trig Palin at an event (and suggests he is being used as a prop), the organizer of the event says he wasn't there; Gross appears to have mistaken another child for Trig Palin.

Palin almost never talks to neutral media outlets, leaving her -- as critics accurately note -- subject to none of the questions, challenges and reality checks that the political press puts regularly to almost every other national political figure. She takes a lot of heat for this, deservedly.

But with the hunger for information about her, and the traffic she drives, the press sometimes compensates by printing such thinly sourced, badly reported nonsense about her that it's hard to imagine it making it into a serious magazine like Vanity Fair if it concerned any other figure.