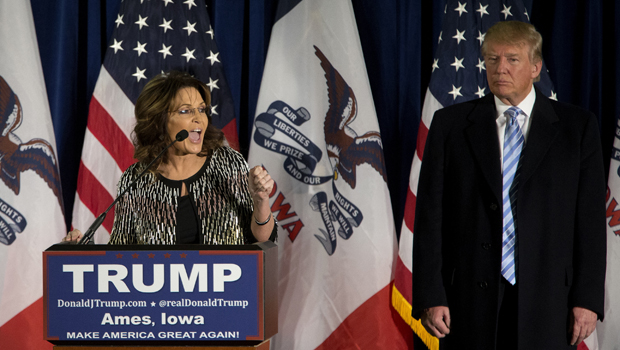 "We are ready for a change," Palin said at a Trump rally in Ames, Iowa, with the candidate by her side. "We are ready, and our troops deserve the best -- a new commander in chief whose track record has proven he is a master at the art of the deal."

She added, "He is beholden to no one but we the people -- how refreshing."

Trump said in a statement that Palin "is a friend, and a high quality person whom I have great respect for. I am proud to have her support."

Palin is one of the most high-profile Republicans yet to endorse a 2016 candidate, giving the current GOP front runner more momentum in the final two weeks before the Iowa caucuses. After joining Trump in Ames, Iowa on Tuesday, she will travel with him to his two campaign events on Wednesday, in Norwalk, Iowa and Tulsa, Oklahoma.

In a press release, Trump's campaign touted the endorsement as "coveted and influential." The campaign called her "a trusted conservative" and credited her with helping to launch the career of several "key future leaders of the Republican Party" -- including Trump's biggest rival for the GOP nomination, Sen. Ted Cruz. The press release quotes Cruz, who said, "I would not be in the United States Senate were it not for Gov. Sarah Palin... She can pick winners."

Earlier, Cruz campaign spokesman Rick Tyler told CNN that if Palin endorses Trump, it would be a "blow" to her reputation because, he said, Trump has held progressive views throughout his life.

That prompted Palin's daughter Bristol Palin to slam the Texas senator in a blog post titled "Is THIS Why People Don't Like Cruz?"

On the campaign trail in New Hampshire on Tuesday, Cruz tried to diffuse the situation. "Oh listen, I love Sarah Palin, Sarah Palin is fantastic," he said. "Without her friendship and support, I wouldn't be in the Senate today, and so regardless of what Sarah decides to do in 2016, I will always remain a big, big fan of Sarah Palin's."

While Palin is still a big name among conservatives, it's unclear how much she can help Trump in Iowa. A Bloomberg Politics/Des Moines Register survey released a month before the 2014 midterm elections found 56 percent of Iowans said Palin's support for Joni Ernst's Senate bid thought it would do more to hurt her than help her. Just 30 percent said it would help.

Like Trump, Palin is a reality TV star who has been criticized for putting style above substance on the political stage. Additionally, she and her family carry some baggage. On Monday, her 26-year-old son Track Palin was arrested Monday in Wasilla, Alaska and charged with with domestic violence and other counts.

Still, Palin's endorsement at the very least brings even more attention to Trump's campaign at a critical point in the race.

Last July, Trump said on the talk show "The Palin Update" that he would love to have her join his administration if he's elected president.

In September, Palin told CNN's Jake Tapper than she would be happy to join a Trump administration and suggested she would be interested in leading the Department of Energy.