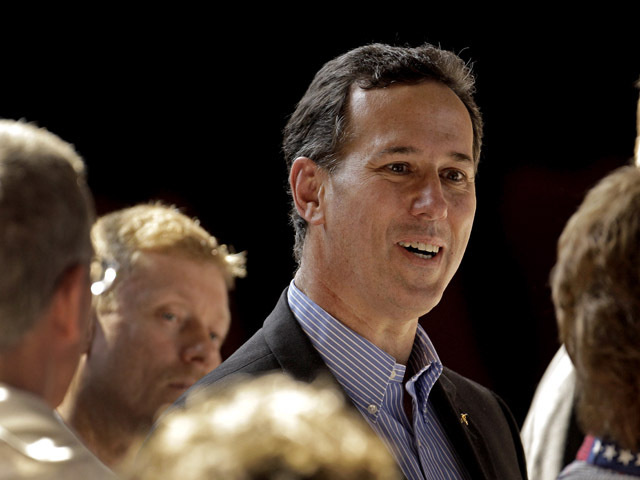 (CBS News) SPRINGFIELD, Mo. - Rick Santorum suggested on Saturday that a nuclear-armed Iran may be the emerge as the most important issue of the 2012 election and told a crowd of voters here that his foreign policy experience may make him the most qualified candidate for the presidency.

"That may be the issue of the day come this fall -- a nuclear Iran. Or on the precipice of it [with] Israel potentially having to go to war to stop that development," Santorum told a crowd of more than 500 at an electronics security systems manufacturing plant here shortly after declaring victory in the caucuses in neighboring Kansas.

In the face of increasingly good jobs numbers, he argued, the economy may be taking a back seat to foreign policy. Romney repeatedly has sought to make the case that the election revolves around his ability to bolster the economy better than President Obama.

"I may not have been a Wall Street private equities fund manager, but I served eight years on the [Senate] Armed Services Committee," Santorum said, in a clear attempt to discredit the experience of his rival, Romney, who has centered his campaign around his business experience. "I led the charge identifying Iran's nuclear program nine years ago. Authored bills to put sanctions to stop it. We're not electing a CEO, we're electing a commander-in-chief and there's one person on the stage with experience."

The Romney campaign swiftly responded that it would stack its foreign-policy stance against Santorum's.

"For years, Governor Romney has been talking about the threat from the Iranian regime and offering strong policies to prevent it from obtaining a nuclear weapons capability. He is the only remaining Republican candidate to offer a comprehensive foreign policy and national security strategy that paints a bold contrast with Barack Obama's naive policies of weakness and appeasement," Romney spokeswoman Andrea Saul said.

Santorum responded to his critics who have said his strong rhetoric on Iran is war-mongering by arguing that he authored a bill in 2004 to support the Iranian people against their leaders.

"Not only did Barack Obama vote no, but Joe Biden led a filibuster against my bill. If you want to know what position to take on any national security issue, I got a tip for you -- find out what Joe Biden thinks and take the opposite opinion, you will be right every time," he said.

Santorum has also stepped up his attacks against rival Newt Gingrich, who threatens to siphon off votes and deny him momentum from the Gulf states of Mississippi and Alabama that vote next week.

Referring to the 2010 health care law, Santorum said, "Governor Romney is the worst on this issue. But honestly, Speaker Gingrich is not a whole lot better. For 20 years, when I was pushing medical savings accounts he was pushing a federal mandate for health insurance. For 20 years. And when Romneycare passed he sent out a glowing statement talking about how this wonderful bill had just passed in Massachusetts."

It was a reference to a April 2006 quote by Gingrich in the newsletter for his health care consulting company praising the Bay State's health care law. "The most exciting development of the past few weeks is what has been happening up in Massachusetts. The health bill that Governor Romney signed into law this month has tremendous potential to effect major change in the American health system," Gingrich wrote.