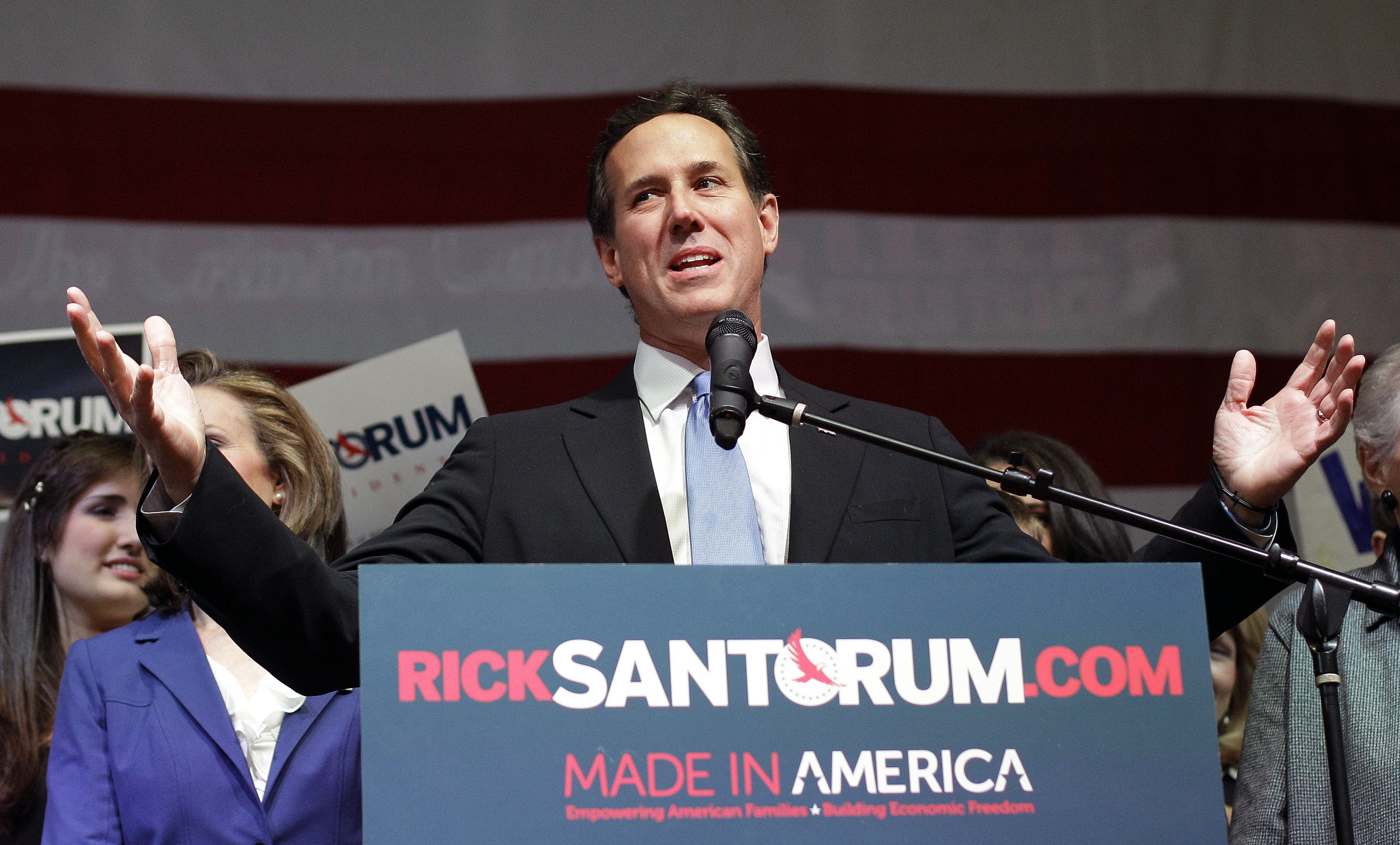 "We have won in the West, the Midwest and the South, and we're ready to win across this country," Santorum said from Steubenville, Ohio.

In Tennessee, with 2,140 of 2,141 precincts reporting, Santorum carried 37 percent of the vote, while Romney had 28 percent and Newt Gingrich took 24 percent.

And with 1,955 of 1,961 precincts reporting in Oklahoma, Santorum held 34 percent of the vote while Romney took 28 percent and Gingrich 27 percent. Later in the evening, Santorum was declared the winner in the North Dakota caucuses.

Super Tuesday represents the biggest day in the race for the Republican nomination so far, with 419 total delegates at stake in 10 states -- more delegates than have been awarded in all of the previous nominating contests combined.

After a hard-fought race in Ohio -- a critical state in both the primary and general election -- the results in the Buckeye state were too close to call by the time Santorum addressed his supporters.

Santorum has racked up a number of primary victories in the past month as Republican voters looking for a conservative alternative to Romney turned to him. In his remarks Tuesday night, Santorum took aim at one of Romney's biggest vulnerabilities: health care reform.

Pointing to evidence that Romney encouraged President Obama to use Romney's Massachusetts health care reforms as a model for federal policy, Santorum blasted Romney for failing to provide a clear contrast on the issues with Mr. Obama.

"We need a person running against President Obama who is right on the issues and truthful with the American public," Santorum said.

The former Pennsylvania senator said "Obamacare" was the primary reason he chose to seek the Republican presidential nomination.

"In this race there is only one candidate who can go up on the most important issue on the day," he said. "I've never been for an individual mandate at a state or federal level."

Santorum also played up his own modest lifestyle and humble beginnings, saying, "We need a fighter and someone who learned what America was about by growing up in communities just like this."

In spite of today's significance, no one will be able to formally clinch the nomination Tuesday. It takes 1,144 delegates for a candidate to formally take the nomination, leaving the contenders with a long way to do. Furthermore, none of Tuesday's contests is winner-take-all. Instead, all 10 states are awarding delegates proportionally, either based on the outcome in congressional districts, a candidate's percentage of the statewide vote, or a combination of the two.